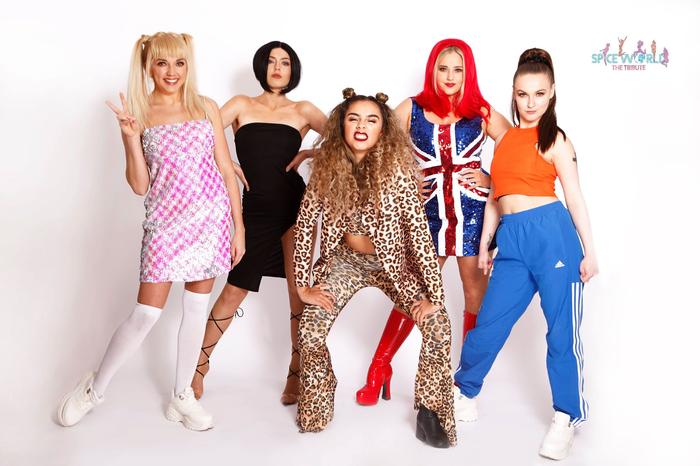 The band are based in Glasgow but are happy to and have travelled whereever required. Especially around Scotland and the North of England.

Pulse Productions (the team behind Little Mix Magic and Simply Ariana) now bring you the ONLY Spice Girls tribute currently based in Scotland. With the pioneers of Girl Power recently announcing their first world tour in over ten years it's the perfect time to bring this show to your venue for the ultimate Girl's Night Out.

SPICEWORLD The Tribute is made up of Amy, Sally, Rachael, Sarah and Kim, five Glasgow based girls with a wealth of performance experience. The girls have all been trained in singing and dance to further education level and embody the energy, charisma and cheekiness of the original band!

The show can be booked as a stand alone Spice Girls tribute or as part of the Girl Power show performed in two 45 minute sets with music played before, between and after sets as standard, keeping the dancefloor full for your guests! The first half of the show is an uncannily accurate tribute to the Spice Girls including their biggest hits and even some audience participation. The second half brings out the girls as themselves in the "Power of She" where they perform all your favourite modern girl band hits including the likes of B*Witched, Atomic Kitten, Girls Aloud, Little Mix, Sugababes and more!

The band were launched in November 2018 but have already secured some impressive bookings. They have shows coming up in several of the Manorview Group Hotels, The Bungalow in Paisley and will be doing a mini theatre tour in the summer with Harbro Events. They receive rave reviews where ever they go and audiences absolutely love them!

This show is fresh, modern and full of the amazing feminine energy we saw in the 90's when the Spice Girls first burst onto the music scene! There's nothing else out there quite like it right now so make sure you strike while the iron is hot! We promise it's what your guests want, what they really really want!