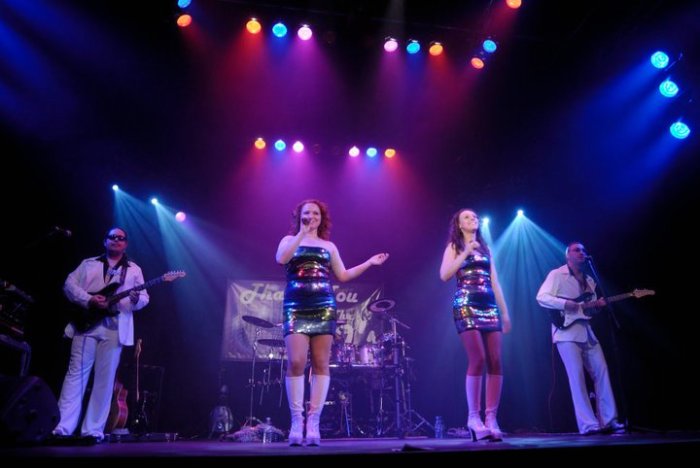 The band are based in Glasgow and frequently play in the central belt of Scotland, but also perform all over the UK.

With a glittering cast of Scotland's finest musicians, dancers and vocalists, the Solid Gold Seventies live show is packed with all of the 1970s greatest hits performed with dazzling showmanship that has garnered rave revues from audiences and critics alike all over Scotland, England and beyond.

Solid Gold Seventies was created by the producers of Scotland's most popular ABBA tribute show ABBA Cadabara. Their sell-out theatre tours are widely regarded as the UK's most spectacular tribute to ABBA.

The Solid Gold seventies live show encompasses more than 30 of the 1970's greatest hits all performed to the highest possible standard. Since their formation, they have quickly achieved an unsurpassed reputation for faithfully reproducing the complex music and harmonies associated with the popular music of the 1970s, while presenting them in a fresh and original way!

The Solid Gold Seventies live experience brings you a tribute show like no other. Their interpretation of timeless hits from the 1970s are always guaranteed to get any audience singing and dancing along. By Combining classic hits with state of the art sound/lighting/multimedia, great musicianship and spectacular choreographed dance routines, Solid Gold Seventies have skillfully crafted a live show which is unrivalled by any any other tribute show in the UK.

As well as theatre/town hall performances, the band are an ideal choice for corporate events or weddings/private party events. They have performed in some of the most prestigious venues and outdoor festivals in the UK, working with X Factor & Britain's Got Talent stars such as Jedward, Jai McDowall, Lloyd Daniels, the McDonald Brothers...to name but a few.