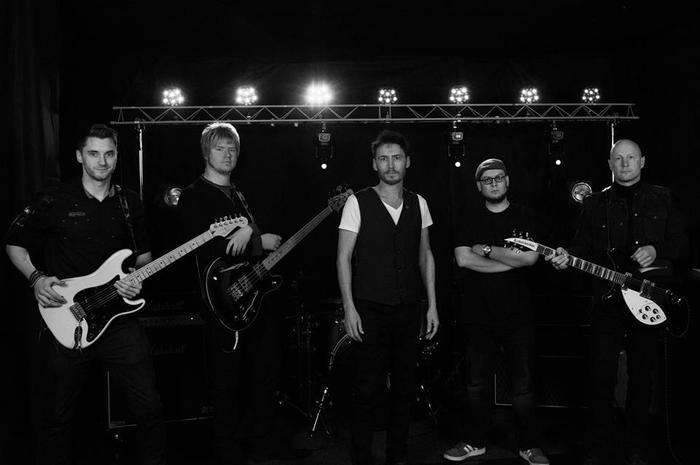 The band are based in Birmingham and frequently play across the West Midlands and are happy to travel for events.

The River Dogs are a talented and experienced function band based in Birmingham. The band has strong and varied repertoire of songs, ranging from modern indie chart toppers, to classic 60's sing-along anthems. The band are also able put their own spin on certain songs during the set which keeps it fresh, for both them and audience.

The band is a made up of close-knit group of friends who are very experienced musicians and have a passion for performing. The River Dogs are able to perform a wide range of songs with a male lead vocal, along with strong backing vocals and harmonies and even some rapping when required. The experienced line up has performed with the likes of: The Strangles, Reef and Maximo Park, toured the UK, performing in venues such as The NEC, Ricoh Arena, St. Georges Park and G- Live. Performed for clients such as: Marks & Spencers and Ideal Standard.

The River Dogs aim to make each performance enjoyable and memorable from soaring lead vocals and guitar solos, to funky bass lines and drum fills. Their dynamic and engaging set is sure to leave you wanting more..

Bet You Look Good On The Dance-floor – Artic Monkeys
Use Somebody – Kings of Leon
Valerie – Amy Winehouse
Dakota – Stereophonics
Mr. Brightside – The Killers
Human - Rag and Bone Man
Take Me Out - Franz Ferdinand
Lonely Boy - The Black Keys
Parklife – Blur
Dreaming Of You – The Coral
Song 2 - Blur
Maroon 5 – Moves Like Jagger
Hold Back The River – James Bay
Golden Touch – Razorlight
I Predict a Riot - Kaiser Chiefs
Chelsea Dagger – The Fratellis
Dani California – RHCP
Last Night - The Strokes
Seven Nation Army – White Stripes
Steady As She Goes – The Ranconteurs
Wonderwall – Oasis
Rocks – Primal Scream
Bohemian Like You – The Dandy Warhols
Helicopter - Bloc Party
Disco 2000 - Pulp
The Bucket – Kings of Leon
Iron Sky - Paolo Nutini
Naive – The Kooks
Hey Ho – The Lumineers
Rude - Magic
Hard To Handle - The Black Crowes
Place Your Hands - Reef
Grounds For Divorce - Elbow
Figure It Out – Royal Blood
Are You Gonna Be My Girl - Jet
No One Knows - Queens of the Stone Age
Riverboat Song – OCS
Drops of Jupiter – Train
Valerie – The Zutons
Sex on Fire – Kings of Leon
Counting Stars – One Republic
Fire – Kasabian
Thinking Out Loud – Ed Sheeran
Shut Up and Dance – Walk The Moon
Don’t Look Back In Anger - Oasis
Play That Funky Music – Wild Cherry
Long Train Runnin’ – The Doobie Brothers
A Town Called Malice – The Jam
My Generation – The Who
20th Century Boy – T Rex
All Right Now – Free
Teenage Kicks – The Undertones
Should I Stay Or Should I Go – The Clash
I Saw Her Standing There – The Beatles
With A Little Help From My Friends – Joe Cocker
I’m A Believer – The Monkeys
You Really Got Me – The Kinks
Come Together – The Beatles
Johnny B. Goode – Chuck Berry
Mustang Sally – Wilson Pickett
Twist and Shout – The Beatles
Shake Your Tail Feather – Ray Charles
Come Up And See Me – Steve Harley and Cockney Rebel
Keep On Running – Spencer Davis Group