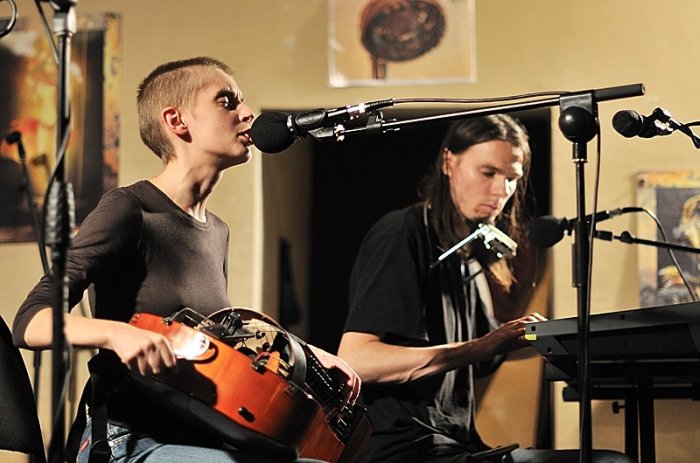 Dark Patrick are usually based in Kyiv, Ukraine but are available for performances throughout the U.K.

Dark Patrick (Britain - Ukraine) successfully combines a mixture of old and new traditions with a modern sense in a moody and mysterious acoustic blend of voice and instruments. Much of the sound replicates the style of a drone with simple percussion and instrumentation. The best feature is in the structure of the music, the rise and fall of the dynamics, how it increases in intensity with a real sense of purpose and emotion. The repetition works to establish a meditative trance but the feeling is one of attentive focus.

Dark Patrick has a genuine reverence for folk music history and traditional instruments but their inventiveness is new and alive. There are elements of ethnic, ambient styles in an experimental presentation. Often tranquil but other times striking, their music spans an array of emotions within their genre. Their image and music coincides with a sensitive, deeply emotional and artistic style and they have not only taken their place in their musical genre but have created their own, as it is very hard to compare their emotional and unique music with anything else at all.

Dark Patrick combines the traditions of various peoples, having a repertoire of songs in English, Ukrainian and Irish languages, and their own compositions, which they deliver with such force, fullness and extravagance that it is hard to believe that there are only two people on stage.