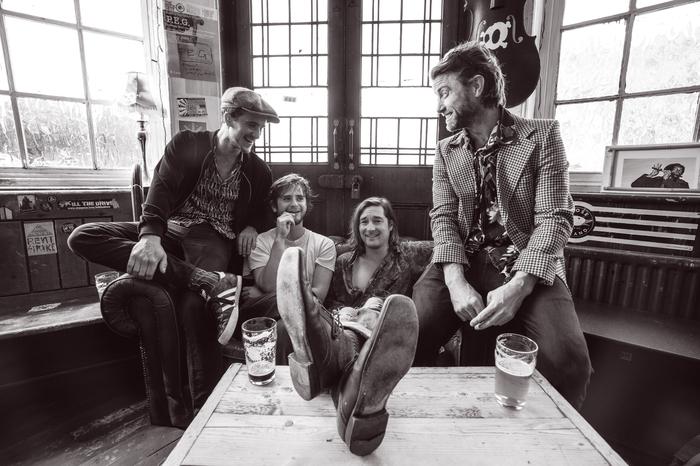 The band perform mainly around London, the South East, and South West

Great Big Feet are an established and versatile blues n' boogie band. They have a large repertoire of vintage songs ranging from light swing and jazz to jump blues and rock & roll. They're happy to be playing in the background creating a great atmosphere, but can also deliver an exciting stage show guaranteed to get people up dancing. The four piece band consists of a bassist, guitarist, pianist and our drummer who is also the main vocalist. They can also perform as a three piece (Piano, Guitar and Drums/Vocals) or as a five piece band (Piano, Guitar, Bass, Drums/Vocals, and Saxophone).

Great Big Feet perform at a wide range of events including weddings, pubs and club gigs, corporate events and festivals. Their corporate clients have included HSBC and Twickenham Stadium for their annual Christmas party. They have played at over 50 weddings working at venues including The Grove in Watford and the White Hall Court in London. They regularly play at popular jazz and blues clubs in London and this year are performing for the second time at Glastonbury festival.

Ain't Nobody Here but us Chickens - Louis Jordon
Why Don't You do Right? - Kansas Joe McCoy
Blue Moon – Mel Tormé
All Of Me – Louis Armstrong
Caledonia – Louis Jordon
No Particular Place To Go – Chuck Berry
I Wanna Be Like You –Louis Prima (From the Jungle Book)
The Very Thought of You – Nat King Cole
High Heel Sneakers – Tommy Tucker
Hallelujah I Love Her So – Ray Charles
Hound Dog – Big Mama Thornton/Elvis Presley
Careless Love – Bessie Smith
Going Up the Country – Canned Heat
Jump, Jive and Wail – Louis Jordon
Maybelline – Chuck Berry
I’ve Got A Woman – Ray Charles
Trouble in Mind - Thelma La Vizzo
Nobody Knows You When You're Down and Out - Bessie Smith
One Bourbon, One Scotch, One Beer - Amos Milburn
All Shook Up – Elvis Presley
Dust My Broom – Elmore James
Stack O Lee – Champion Jack Dupree
Bare Necessities – Phil Harris (From the Jungle Book)
All Of Me – Billie Holiday
Lucille – Little Richard
I Found You (I Feel Good) – Yvonne Fair (James Brown)