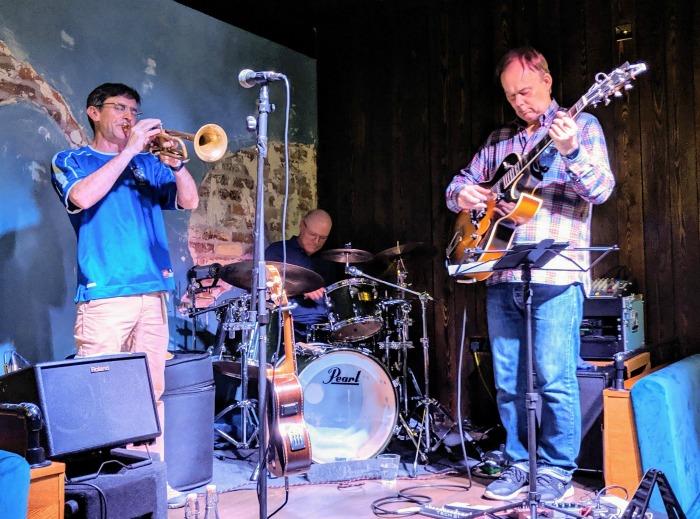 The band are based in Edinburgh and play regularly throughout Scotland and across the North of England.

Reginaldo Dias was born in Uraí a small village in the Brazilian countryside. He first played percussion in the local marching band before moving on to trumpet in his early youth. His first music teacher was the fittingly named, Saul Trumpet. Reginaldo's military service was spent with the Brazilian army band after which he studied trumpet for 4 years on the way to his Bachelor's degree in Music. Reginaldo has worked in many musical styles including Brazilian folk, classical, jazz and pop. Since founding Dias Brazil in 2005, Reginaldo has developed his compositional skills as well as his vocal, percussionist and dancing talents.

Iain Carleton is an in-demand performer in jazz venues and festivals such as Edinburgh's Jazz Bar, Aberdeen Jazz Festival and Belladrum Festival. He has taught and delivered workshops around Edinburgh and Glasgow including The Academy of Music and Sound, Fife College and the University of West London and holds qualifications in performance and teaching. His performances with Dias Brazil stand on the shoulders of the great recorded musicians of Brazil which he meticulously recreates and reinterprets for the Dias Brazil ensemble.

Drummer Terry Sloan (recently described in the Edinburgh Evening News as "a direct unfussy performer" with "nimble fills and in-the-pocket timing") has recorded and performed within many settings ranging from musicals, jazz orchestras through to pop, rock and new wave groups. In 2002, in the Edinburgh Music Theatre production of 'Return to the Forbidden Planet', Terry played the drums in 'the eight-piece big band, led by Peter Horsfall, which if it was any tighter would snap' - The Scotsman 28/02/2002. Terry has been with Dias since its inception in 2005.