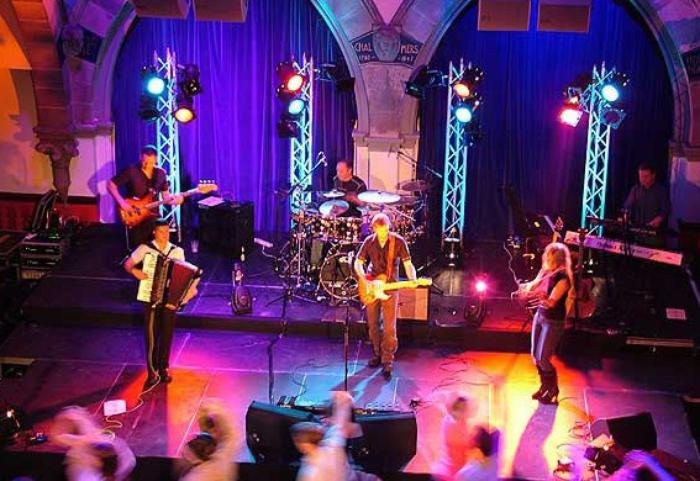 The band are based in Glasgow but regularly play across Scotland and the UK and throughout Europe.

Formed in February 1997, The Picts have become one of the most popular live acts on the Folk-Rock and concert scene. They have reached out with their unique brand of Celtic Rock and captivated hundreds of audiences both at home and abroad. There is a considerable influence of original material combined with the traditional. The songs and instumentals are upbeat, powerful and irresistible for dancing, yet retain their original sentiment, feeling and intimacy.

These days the band are never far from the limelight. In 1997/98 they headlined the Hogmanay bash at George Square, Glasgow in front of 40,000 people. They have appeared twice at the famous Interceltique Festival in Lorient, Brittany to great acclaim from the French press and enthusiastic appreciation from the audiences. This led to a considerable amount of interest in the band throughout Europe. Amongst countless festivals, concerts and ceilidhs they played at the James Bond Ball in Aberdeen (Britain’s biggest ever student event) for two years running, headlined the Celtic stage of the Stirling Millenium Hogmanay celebrations, took part in the Gael 2000 concert in Coventry with comedian Roy Walker and returned to France to headline ‘Celtifolies’ the first ever Celtic festival in Lyon. The band have had a number of sell out concerts in Glasgow’s Cottier Theatre and played at the wedding of Dougie Payne (Travis) and Kelly MacDonald (Trainspotting). In August 2004 The Picts were asked back for the third time to do the closing night of the Tennent’s West Highland Week Yatching Festival in Oban and at Hogmanay 2004 they played the last gig at Cottier’s Theatre in Glasgow before it shut down for refurbishment.

Among their many radio interviews and appearances The Picts were on BBC Radio Scotland’s program ‘The Lemontree’ bringing their music to a wider audience and they took part in BBC Radio nan Gaidheal’s live broadcast ‘Tiompan’ for BBC music live. The Picts have also played live on breakfast TV and appeared on a live Millenium Hogmanay show for LTV. In October 2000 they were filmed for a Gaelic music program ‘@ Ire’ for the BBC.

In 2006 the band began the year by playing at the 02 Burns supper, and the TV celebrity-packed tenth aniversary year of the Comedy Unit in Glasgow. A trip to the Celtic Festival of Wales near Cardiff, followed this and a magical trip to headline the Festival des Hautes Terres at St Flour in the south of France. On their return to Scotland they played at 'T in The Park' for the tenth time.

Among other festivals and concerts, The Picts played at the 'Drams in the Field' Festival, which was held in beautiful Glen Elg, and they took part in the 'Thunder in the Glen' Rally for the second consecutive year in August 2007. On St Andrews Day 2007 The Picts returned to play in George Square, Glasgow, almost ten years after they had headlined the Hogmanay bash there. The event was 'Shindig in the Square' - Glasgow's celebration of Scotland's Winterfest Festival, which featured an appearance from the Deputy First Minister, Nicola Sturgeon. In 2008 the band played at the Microsoft Burns Supper in Edinburgh, and at the closing night of the Museum of Scotland in Edinburgh, before is closed down for long term refurbishment. They also appeared at the Highland Hospice in Inverness for St Andrews Day.

Apart from concerts and festivals, much of the year's schedule is taken up by playing at various functions throughout the year - these take the band far and wide, the length and breadth of Scotland and as far afield as the south of England and on the continent.

Discography....
At present the band have two CDs available. The first is their highly acclaimed album ‘The Island’ and the second is their latest and equally acclaimed album ‘Moving Sands’. Both albums have been used by BBC Scotland for Gaelic television programmes and 45,600.

Copies of The Island‘s opening track ‘The Peak’ was put on a French compilation CD, and the band have also been the subject of great interest in Argentina. As a result all the songs from their albums have been translated into Spanish! Some of The Picts also played on the album 'Ghosts' - The Picts frontman Douglas McQueen Hunter's debut album.

“In the end we always have a lot of fun and this comes through in our playing. The more we enjoy ourselves the more our audiences will.”