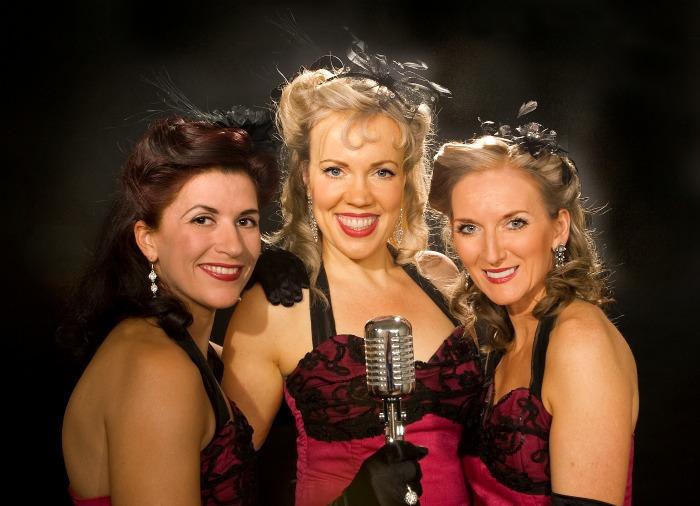 This band are based in Glasgow and regularly play across Scotland and the UK, with some overseas shows.

If you could browse through the vast number of major record label catalogues produced in the 30's 40's and 50's, it would soon become apparent to you that there was never a time when a female vocal trio was not included. From The Boswell Sisters to The Andrews Sisters, those girls provided some truly inspirational music. That era has been created by the glamorous Swingcats.

Hailing from Glasgow, they are a honey laced ensemble who deliver a sassy concoction of Jazz and Swing with three-part harmonies. Formed in 2000, they have fast become the nation's top harmony group. The line-up includes singer/actors Nicola Auld, Laura Ellis and Alyson Orr, and Pianist/Arranger Karen MacIver, whose playing and great vocal arrangements have gelled together a marvellous repertoire of classics.

Their debut album 'Swing It!' was recorded in December 2002 and sold out. The long awaited second album 'Everybody Wants To Be A Cat' (2006), features The Karen MacIver Trio and was a hit with audiences and radio stations alike. The girls have thrilled audiences throughout the UK and internationally and have completed many theatre tours to great acclaim. Their shows are glamorous, polished and fun, capturing the look and sound of the great era of the 30's, 40's and 50's.

They have appeared alongside Jazz greats such as Annie Ross and Martin Taylor and have performed a number of recent guest performances with The Glenn Miller Orchestra UK. Other highlights include shows in Glasgow's Royal Concert Hall, The Glasgow Jazz Festival and trips to Monte Carlo, Dubai and Marrakech.

The Swingcats are perfect for openings and launches, corporate nights, concerts, parties and themed events. From the golden age of Swing to the motivational songs of wartime, this all-female vocal ensemble are truly an act for all occasions. Rich in optimism and cheerful in delivery. The Swingcats bring this great music to life with their unique arrangements and beautiful three-part harmonies.

A String of Pearls
Alright, OK You Win
Mad About The Boy
Too Darn Hot
yes Sir That's My Baby
Lullaby of Broadway
Satin Doll
42nd Street
Mr. Sandman
Anything Goes
Summertime
Ain't Misbehaving
Everybody Wants To Be a Cat
Sisters
Nice Work If You Can Get It
Bewitched
Can't Help Lovin' That Man
It's Too Darn Hot
Moon River
Diamonds Are a Girls Best Friend
WW2 Show - "I'll Be Seeing You"
Don't Sit Under The Apple Tree
Apple Blossom Time
The Boogie Woogie Bugle Boy
Now Is The Hour
Alexander's Ragtime Band
A Nightingale Sang In Berkeley Square
Lili Marlene
The White Cliffs Of Dover
You'll Never Know (If You Don't Know Now)
Strip Polka
I'll Be Seeing You
The Thingummybob Song
We'll Meet Again