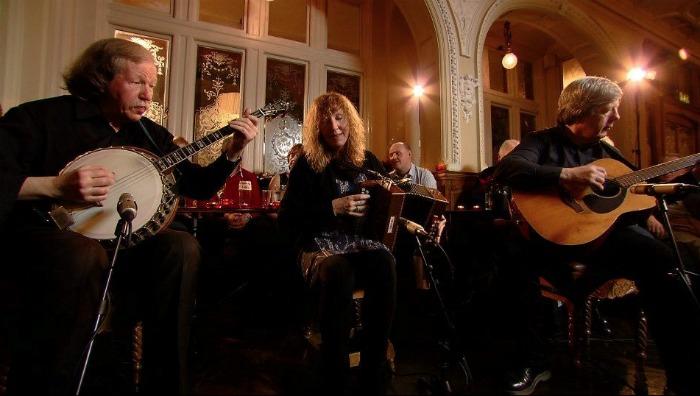 The band are based in North West London and will travel approximately 50 miles radius.

Wraggle Taggle are a professional and talented traditional Ceilidh band with many years' experience specialising in traditional music for pubs and clubs, and at schools and colleges, festivals, weddings, parties and corporate functions. All the musicians have been performing, touring and recording for many years and two are award-winning performers.

The band are flexible enough as regards personnel, instrumentation and musical style to be able to tailor a band to your specific requirements, and go out as anything from a duo to a six-piece, amplified or acoustic, with or without a caller. All bands are punctual, smart and sober, but still good fun!

Award winning musicians Carlene Anglim (fiddle), Eugene Teevan (accordion), and Mick O'Connor (tenor banjo) form the "core" of the band performing in various line-ups with bandleader Mick Bailey (guitar/vocals). Other instruments such as, flute, tin-whistle, or percussion may also be added. Speciality instruments such as Irish or Scottish bagpipes or traditional dancers are also available.

The most common format for a ceilidh consists of four musicians plus a caller who will teach the dances from scratch - no experience needed! A ceilidh is something really different and ideal for a successful party, as it is a fun way to get families, friends and colleagues to mix and meet and because all age groups become involved. The faster dances are an energetic work out, and we also play in a more relaxed romantic mood.

Wraggle Taggle play traditional Irish, Scottish, English and American songs and tunes with innovation, flair and vitality. Musical influences include; The Chieftains, Planxty, The Bothy Band, Altan, Ally Bain, Boys of the Lough, Jimmy Shand, The Pogues, Van Morrison, The Dubliners and Christy Moore and the many talented friends they have met over the years in the vibrant traditional music scene. The band are both sensitive to the occasion and responsive to the mood of the audience. If required to they can concentrate on one particular style e.g. Scottish or Irish throughout the performance.

“This is the best birthday present I have ever had” Zoe Ball, 20th October 2018

Songs
Wraggle Taggle are equally at home doing a song-based performance as they are playing tunes for a dance. Bandleader Mick Bailey built his extensive repertoire of songs during many years performing in public.

Main Set
As I Roved Out (Christy)
Auld Lang Syne
Back Home in Derry
Band Played Waltzing Matilda
Black is the Colour
Black Velvet Band
Bonny Ship the Diamond
Brown Eyed Girl
Caledonia
Clare to Here
Cliffs of Doneen
Cockles & Mussels
Come by the Hills
Danny Boy
Dark Island
Dirty Old Town
Fairytale of New York
Far away in Australia
Fiddlers Green
Fields of Athenry
Fleur of Scotland
Foggy Dew
Galway Girl
Galway Shawl
Hallelujah
I'll Tell My Ma
Irish Rover
Isle of Tears
Jambalaya
Lakes of Ponchartrain
Last thing on my mind
Leaving of Liverpool
Lights of London
McAlpine's Fuseliers
Mountain Dew
Muirsheen Duirkin
My Lovely Rose of Clare
Nancy Spain
Only our Rivers run Free
Ordinary Man
Peggy Gordon
Queen Jane
Ride On
Sean South
Seven Drunken Nights
Spancil Hill
Star of the County Down
Sweet Sixteen
Sweet Thames Flow Softly
Tipping it up to Nancy
Town I Love so well
Whiskey in the Jar
Whistling Gypsy Rover The
Wild Colonial Boy
Wild Rover
Will you go Lassie Go
Willie McBride
World of Our Own
Rock / Pop
All My Loving
American Pie
Amorillo
Annie's Song
Brown Eyed Girl
Can't buy me love
Country Roads
Dance the Night Away
Fairytale of New York
From Me To You
Galway Girl
Hallelujah
Hey Good Lookin
I just called to say I love you
I'll never find another you
I wanna hold your hand
Return to Sender
Summer Holiday
Twist & Shout / La Bamba
World of Our Own
Yesterday
Other popular songs we do
500 miles
American Pie
Amorillo
Banks of the Ohio
Boys from the County Armagh
Bunch of Thyme
City of Chicago
Country Roads
Curragh of Kildare
Dance the Night Away
Do you want your old lobby washed down
Dublin in the Rare Old Times
Follow me up to Carlow
Hey Good Lookin
Hokey Cokey
I'm a Man you don't meet every day
Jolly Beggarman
Maggie
Marie's Wedding
My own dear Galway Bay
Red Rose Cafe
Slievenamon
Soldiers' Song
Spanish Lady
Take me Home to Mayo
Waltzing Matilda
What shall we do with the drunken sailor?
Where the three counties meet
Willie and Mary
Songs popular in care centres
Ain't Misbehavin'
A Nightingale Sang in Berkley Square
Annie's Song
Anniversary Waltz
Arriverdeci Roma
As Time Goes By
Blue Moon
Camptown Races / O'Suzannah / Turkey in the Straw
Daisy / Down at the Old Bull & Bush / I belong to Glasgow
Hey Good Lookin'
If you were the only Girl in the World
I just called to say I loved you
I know I'll never find another you
I'll Take you home again Kathleen
I'm getting married in the morning / Roll out the Barrel / My old Man said / Knees up Mother Brown
I'm in the mood for Love
It's a Long Way to Tipperary / Pack up your troubles / Coming Round the Mountain / When the Saints
Leaning on a Lampost
Lilly Marlene
Magic Moments
Maybe it's because / The Bells are Ringing / Lambeth Walk / Side by Side
My Way
On Mother Kelly's Doorstep
Que Sera Sera
Return to Sender
Rose, The
Show me the way to go Home
Strangers in The Night
Street Where you Live
Summer Holiday
Tea for Two
That's Amore
Underneath the Arches
We'll Meet Again
When Irish Eyes are Smiling
White Christmas
White Cliffs of Dover
You Are my Sunshine
You Made me Love You
And many, many more!....
Dances
A ceilidh or barn dance is an evening of informal traditional dancing. Perfect for a wedding or party, it is suitable for all ages and provides a great way for people to mix and socialize. The faster dances are an energetic work out, and Wraggle Taggle also play in a more relaxed romantic mood.
No experience necessary!
Our callers teach the dances from scratch - no experience necessary! Everyone will have a good time! Mistakes are half the fun of it! Nowadays there's lots of crossover between traditions, but the dances are thought to have originated in particular countries or regions. If you prefer, Wraggle Taggle can offer dances concentrating on one style e.g. Scottish or Irish.

The selection of dances at your function depends on your caller using their experience, working with the audience and going with what works best.