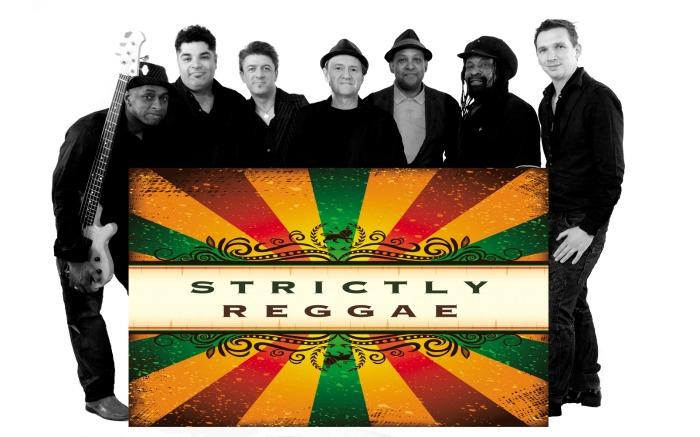 The band are based in London, Cambridge & West Midlands but are available nationally and globally.

This is reggae music. And when it comes to unique, high-class corporate entertainment nobody does it better than Strictly Reggae. They consist of members of reggae superstars UB40 who have joined ranks with some top session musicians who have worked with everyone from One Direction and Take That to Eric Clapton, Sly and Robbie, The Spice Girls and Robert Plant.

They bring you the very best in reggae hits, past and present. Performing material by legends such as Bob Marley, Eddie Grant, Ken Boothe, UB40 (funniliy enough), Gregory Isaacs, Maxi Priest and many, many more.

Strictly Reggae will ensure your event goes off with the ultimate bang and that everyone leaves with a smile on their face and ‘da riddim’ in their hearts.

The core members of Strictly Reggae are:

Strictly Reggae use a pool of top class bass players and drummers including Aitch Bembridge, original drummer from the Specials and the Selector, and Christopher Redwood on Bass, (James Taylor Quartet, Nitin Sawney, Zeke Manyika)

Strictly Reggae consists of current professional session musicians. Have performed all over the world in the biggest arenas and venues. Featured on the following shows: Tops Of The Pops, This Morning, National Lottery, Live, Live Earth, GMTV, MTV, VH1, Later With Joolz Holland, The X Factor, TGI Friday. Performed in concert venues such as: Hollywood Bowl, O2 London, LG Arena Birmingham, Bollywood Awards, Evening News Arena Manchester, Wembley Arena, The Point, Dublin, The Waterfront, Dublin Castle, Warwick Castle and all of the major arenas in the U.K. The list goes on and covers the rest of the world.

Martin and Laurence have been playing with UB40 for many years and they have strong connections with the guys in the band. So much so that Strictly Reggae has the added benefit of being able to enlist the talents of UB40 lead singer Duncan Campbell and Toaster/Rapper Astro for selected corporate shows based round a UB40 theme.