As reported last week, it was the time  of ’80s acts, for some reason this last week or so has been all tributey. Never quite got the whole tribute act thing when it first started to be honest but it’s really popular and I have to admit, these guys graft. And after all, what’s wrong with a bit of nostalgia? I must be getting less cynical with age, which is odd. It’s a strange world the tribute one. Did you know Van Halen have 25 tribute acts, Led Zeppelin have an all-girl tribute act and, my favourite; Kiss have not one but two tribute acts peopled by dwarves. That I’d like to see and I can’t stand Kiss.

Dirty Harry is a great name for a band, it’s an even better name for a Blondie tribute act. Another Edinburgh 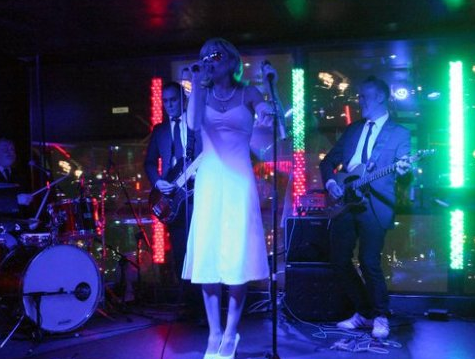 based act (no bias honest guv, just the way things have worked out recently). Formed by the former lead singer of Modus who, in her spare time is a consultant psychiatrist. Which must come in handy in the very sensible and not stressful at all music business. I’ve still got Blondie’s first 4 albums on vinyl in a cupboard somewhere and can remember saving up to buy Parallel Lines back in 1978 so I was slightly worried when these guys got in touch, I needn’t have been. Looks, sounds and attitude, all spot on.

The Abbababes (below, but you probably guessed that) are almost as well travelled as the original act, (although I’ll wager ABBA never worked with Cannon and Ball…) and pride themselves on being considered the UK’s No 1 Abba tribute act. A duo, rather than a four-piece this means they’ve never had to bother finding a pair of musos to impersonate beardy and the other one and can concentrate  on their own look and sound. 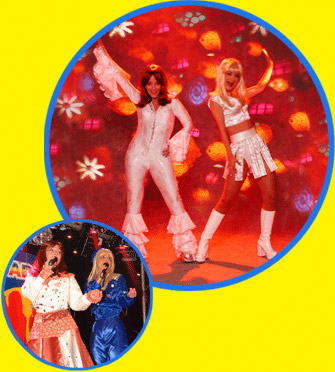 Madonna by Knight (below, he types, somewhat redundantly) came to us via another act when her husband (not Madonna’s, I believe she’s available) casually asked if, as well as his band, Motown Magic we’d like a Madge tribute act on the books. Hell yeah, we don’t have one of those. I would never have admitted it at school for fear of a doing (I went to a lovely school) but I’ve always thought her an underrated songwriter. I can live without Like a virgin and other such pap but  Express yourself, Borderline and Beautiful stranger are truly great pop songs in my book. Anyway, Madonna by Knight (her surname’s Knight) is a 100% dedicated authentic tribute act covering all Ms. Ciccone’s hits from Virgin through to more recent hits. And given she performs with backing tracks she is able to play quite small intimate gigs as well as larger, top end venues. 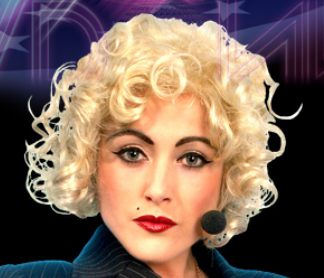 Classic Clapton are a four piece tribute to, well Eric Clapton obviously. I alway had an idea of Clapton as dad-rock (mainly because my dad used to play his eighties stuff when I’d rather be listening to Blondie, see above) but my opinion changed, as ever with age when I heard the Yardbirds and Cream and understood why music fans in the 60s would daub “Clapton is God” all over London. Mike Hall is possibly too young to be one of the vandals but he’d surely agree with the sentiment. By genetic accident, he not only looks like the great man but sounds like him too. Mike’s also met him a couple of times and has a superb keepsake in the shape of a note of encouragement scrawled on a Concorde menu. Nice. Classic Clapton have been the subject of a Tyne-tees TV documentary  and are celebrating their 25th anniversary with a UK tour. I’d like to think a certain bearded rock legend will sneak in to admire the show. 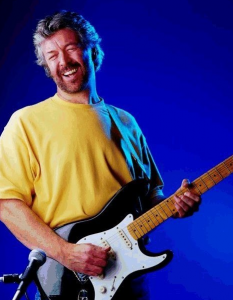 In other news, a band on the roster has tasked me with finding them some European festivals for next year which has been an eye opener. There’s MILLIONS of them. Well, a few thousand maybe. Interestingly, to me anyway, is that the standard of website for about 95% of them is phenomenally high. In aesthetics, functionality, information access and, pretty much all of them have wee union flags in the top right corner to turn everything nice and readable to our uneducated Brit minds. I mention the standard of website as I’ve come across some atrocious examples of the form in the last few months (no URLs, that wouldn’t be nice) and it’s a genuine pleasure to deal with companies who make such an effort on that side of things. Also, Bulgaria seems to have more festivals per capita than anywhere else in Europe. I may do a blog entirely on festivals in the future. We can’t wait I hear you all lie…

As reported last week, it was the time  of ’80s acts, for some reason this last week or so has been all tributey. Never..." />