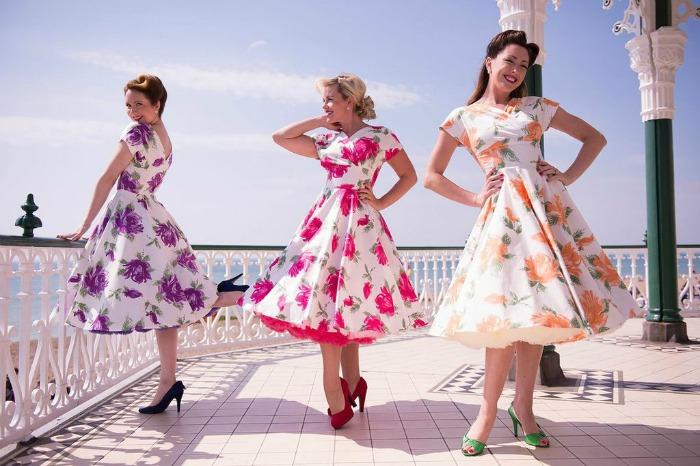 The Spinettes are based in London and frequently play from Brighton up to Birmingham and will travel further afield if required.

The Spinettes are a Retro trio of London West End and International performers who are all singing and all dancing. These glamorous starlets specialise in music from the 1940-1960s with a few modern treats thrown in. The Spinettes are individually highly trained Musical Theatre performers with decades of experience between them. Shows such as Starlight Express, Cats, Chicago, Dirty Dancing, Top Hat, West Side Story, Wicked are but a few of the shows that appear on their CVs.

They were formed in 2010 and since then have performed all over the country at Weddings and Corporate Events; including 10 and 11 Downing Street, The Goodwood Festival, Total Greek Yogurt, Faberge and Mercedes to name but a few. They are frequently asked to perform on the World's largest Cruise Ships as Guest Entertainers and are sponsored by Rossetts Commercials, Vivien of Holloway, Lady Lavender and Gifts ABC.

The Spinettes will bring class, glamour and an abundance of energy to any event. They are one of the leading trios in this genre in the UK. They will be sure to wow every audience and get their toes tapping and hips swaying. A uniquely energetic and fresh act sprinkled with retro sparkles.