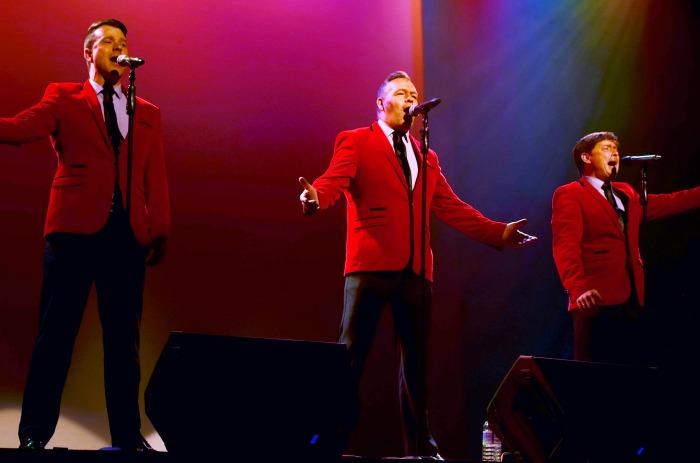 The Jersey Notes are based in Hamilton, South Lanarkshire and regularly performs all over Scotland

The Jersey Notes treat you to an evening of nostalgia as they magically recreate the style and sounds of one of the biggest acts of the twentieth century. These seasoned performers capture the trademark vocal virtuosity, tight harmonies and crisp choreography that made Frankie Valli and the Four Seasons one of the greatest vocal groups of all time.

Featuring all of their biggest hits including Big girls don’t cry, Sherry, Walk like a man, Working my way back to you, Oh what a night (Dec 63) and many more, the guys take you on a musical trip down memory lane and remind you exactly why the original act sold over 100 million records and earned themselves a place in the prestigious Rock and Roll Hall of Fame in 1990.

Following their huge success at the Pavilion Theatre in Glasgow and bookings already in for the King's Theatre in Edinburgh, The Jersey Notes are ready to take Scotland and beyond by storm.

No matter what your age, you will recognize the songs and won't be able to stop yourself from tapping your feet, singing along and getting down on to the dance floor. With fabulous costumes, tight vocals, slick moves and a comedy flare this show has all of the ingredients for a great night out!

Alan has been singing professionally for over 20 years. It all started in 1990 when he was the lead singer with rock band ‘Randy Savage’ who toured the UK. Some years later Alan became one of the resident singers in the Parade Cabaret venue in Glasgow. Recently Alan has teamed up with the ‘Jersey Notes’ very own Pat Coyle to put together a 10-piece tribute show band called ‘Absolute Legends’ Touring UK theatres. Alan has also recently been working as a session vocalist with musicians from ‘Simple Minds’ and 80's Pop band H2O on an original project called ‘The Celtic Fire’.

Gerad McArthur is a Scottish born singer/songwriter. After learning his craft at theatre school in Scotland, he went onto travel the world on various cruise ships & touring productions and is also no stranger to the top 40 charts. Gerad was given his first record deal aged 18 as part of a four-piece boyband. The band toured with Westlife and Girls Aloud on their arena tours and went onto achieve two top 40 UK official hit singles. Gerad's passion for writing music steered him in a different direction, making his own self-penned debut record performing alongside The Wanted as their tour support. He has also performed backing vocals for artists such as Tom Jones, Alesha Dixon, Jason Donavan, Paul Carrack and Mark Owen.

Jamie’s career as an entertainer spans over 20 years, he started out in 1996 as a Red Coat in the West Country and by 1999 he was delivering vocal performances on Cruises ships worldwide. Jamie has performed in theatres up and down the country as both a singer and actor and has appeared in numerous TV shows in a variety of roles. This experience as an all round entertainer has led him to produce, direct and perform countless shows over the years. Jamie has a fantastic ability to captivate his audiences with his quality performances and has been selling out venues now for over a decade.