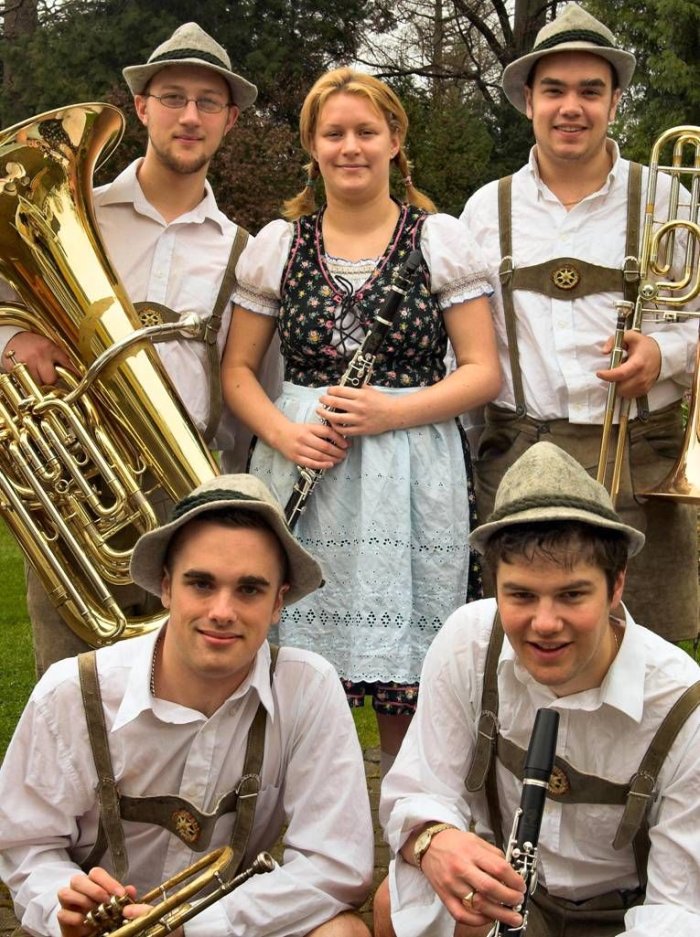 The Band are based in Central London and regularly play around the capital however they would happily travel all across the UK to entertain audiences.

The Bavarian Strollers are one of the country’s most successful Bavarian bands and have been an established German Um Pah band since 1978. The band uses first class professional musicians and is based on a traditional Bavarian band consisting of 2 clarinets, trumpet, trombone and tuba although the band can also perform with a 4, 6 or 7 piece line up adding accordion and drums.

The Bavarian Strollers’ main strength is German Bier Keller or beer cellar nights and they have a vast repertoire of both traditional and popular German music and English sing-along tunes. There are vocals in both English and German and they play in traditional German Lederhosen costume. The band can perform both indoors and outside and can stand, sit or stroll around a venue. They also provide a free German 1 litre stein hire service upon request.

A typical Bier Keller night would consist of a performance of either two or three 45 minute sets, the first usually being mainly traditional music to set the atmosphere with plenty of Bavarian toasts to get the beer flowing. The second set usually contains more audience participation and games with Um Pah music to accompany and a few old favourite English songs. The third set or ‘party’ set is packed with rousing German and English songs from ‘Val der Ree, Val der Raa’ to ‘Daisy Daisy’ and ‘The Dambusters’ to ‘Que Sera’ and involves lots of drinking, dancing, singing and thigh slapping!

The Bavarian Strollers have played at venues around the world including performances in Germany, Italy, the Channel Islands and Ireland. They have performed at many venues throughout the United Kingdom including Harrods store, the RAC Club, Skibo Castle, various Universities, The Royal College of Music, The Royal Netherlands Embassy, Battersea Bier Fest and the National Caravan Exhibition. The Bavarian Strollers have appeared on numerous TV shows including BBC’s Never Mind The Buzzcocks, Sport Relief and Sky 1’s Vroom Vroom and have appeared in several films. They have also recorded on the Olive Branch Label.

The Bavarian Strollers are regularly booked for corporate events and have recently been booked by BMW, Munich RE Insurance and T-Mobile to name a few. The band can add a touch of class and a bit of something different to any event and can perform anything from traditional Bavarian music in the background to a full Bier Fest for your clients.

"Just a quick mail to say thanks so much to you and the band for Saturday night. You were brilliant and really made the item a great success."

"What a night, thanks for filling the pub and getting everyone singing and dancing. Never thought you would get that lot going"

"Thanks for the amazing experience. Who'd have known lederhosen are that much fun!"