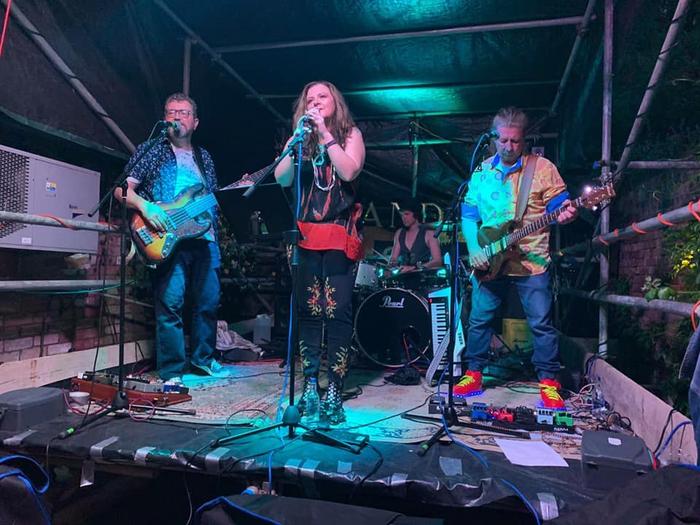 The band is based in Hertfordshire and plays across the South East and further afield.

Smoking Goats is an indie-rock cover band, which plays material from the 80s to the present day. Aside from many cover band staples, part of the Goats' shtick is to remind audiences of classics that they have long-since forgotten. The band also dips its toe into electro-pop and, not for the squeamish, hard rock! Everybody's tastes are catered to - high/slow tempo, barn-burners, ballads, rockers - it's all there and available to fit the mood of your event.

Fronting the band is firecracker lead singer Becky Bremner, who supplements the sound with keyboards and on occasion, keytar! Becky has crowds up and dancing from minute one. Also at the front of the stage are guitarist Steve Pearman and bassist David Plummer, both of whom provide backing vocals and use a wide array of effects on their instruments to treat each song individually. At the back is drummer Will Jones, the band's engine room and pulse.

The Goats play through a digital PA, which enables a clarity of sound unmatched by other cover bands. The band carries a full lighting rig, a smoke machine and various stage props (including goat's heads!), which will turn even the plainest room into a mini-arena for the night!

Book Smoking Goats to make your event one to remember!

Full repertoire
Fly Away - Lenny Kravitz
Sale of the Century - Sleeper
Brass in Pocket - The Pretenders
Picture This - Blondie
Our Lips Are Sealed - The Go Gos
Wide Open Space - Mansun
Creep - Radiohead
I Think I'm Paranoid - Garbage
Roxanne - The Police
Where Is My Mind? - Pixies
Just What I Needed - The Cars
Yellow - Coldplay
Black Horse and the Cherry Tree - KT Tunstall
Ex's & Oh's - Elle King
Valerie - The Zutons
Time Is Running Out - Muse
Learn to Fly - Foo Fighters
Fake Tales of San Francisco - Arctic Monkeys
Hate to Say I Told You So - The Hives
My Favourite Game - The Cardigans
Zombie - The Cranberries
Somebody Told Me - The Killers
Monster - The Automatic
Locked Out of Heaven - Bruno Mars
Bohemian Like You - Dandy Warhols
Teenage Dirtbag - Wheatus
Buck Rogers - Feeder
Basket Case - Green Day
All the Small Things - Blink 182
Dakota - Stereophonics
Highway to Hell - AC/DC
Are You Gonna Be My Girl - Jet
We Are Young - Fun