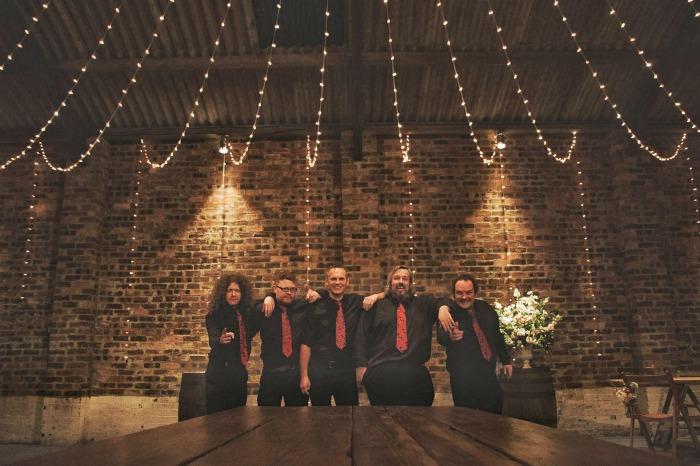 The band are based in the Edinburgh/East Lothian area and frequently play across all of the Lothians and East central Scotland.

The Klones were formed in 2009 and are one of Scotland’s longest established function bands. They are primarily an Edinburgh based band whose line-up features three music graduates, a former EMI signed recording artist and a Playwright Studio award winner 2016/17. As you can imagine they’ve played many great gigs over the years for all different types of customers ranging from individuals, venues, engaged couples to Blue Chip companies such as Standard Life. They’ve even played themed parties for the armed forces and many prestigious places along the way including The Balmoral, Royal Botanical Gardens, Dalmahoy, The Hub, The Scotsman to name just a few.

In 2016 they managed to beat competition from many other local bands after a huge public appeal to be selected by Forth 1 Radio as an official artist to play their summer music festival for Boogie In The Morning. In 2017 they supported 70's soulster's and multi platinum selling artists ‘The Real Thing’.

In 2018 Klones will play their largest ever music festival having been booked to headline the opening night of the Harley Davidson festival Thunder In The Glens. This was previously headlined by The Bay City Rollers starring Les McKeown and is the largest HOG rally in Europe bringing over 10,000 people to the Aviemeore area over the course of one weekend.

Their ability to compile an eclectic mix of music without being overly ‘cheesy’ has positioned them as being one of the coolest and most respected bands on the circuit today. They also have a reputation among their musical peers as being one of the most entertaining bands around. They pride themselves on having the right mix of experience and youth to deliver something special to any event.

They play without backing tracks to guarantee a highly charged performance, packed dance floor and enjoyable evening that won't be forgotten.

"Our organisation approached "Klones Band" with very short notice for a wedding gig we had been asked to organise last minute, the band were nothing short of excellent in their immediate response and correspondence in the run up to the gig and bride and groom thoroughly enjoyed having them play at their wedding. If your looking for a top class wedding band who can diversify to fit your needs... Look no further!"

"These guys are quite possibly the best covers band in Scotland right now. If you are not on the dance floor these boys will not be long in getting you up"

"awesome, the number one function band in Scotland and play all the hits everybody wants to hear plus more. If you need a function band, these are the guys to book"

Forth 1 DJs Boogie and Arlene