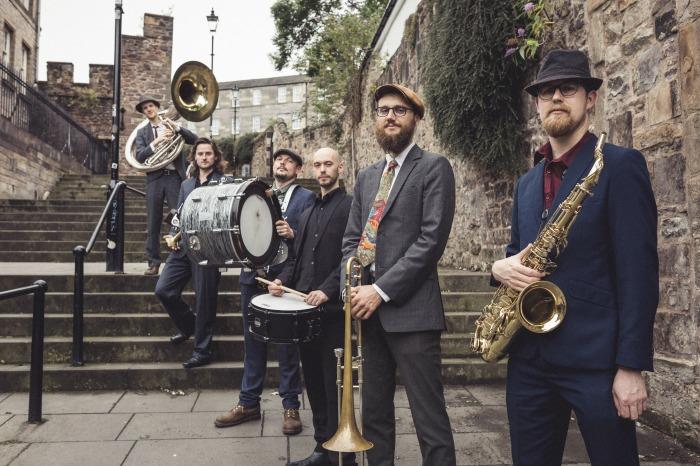 The band are based in Edinburgh and Glasgow and have played throughout Scotland, including Edinburgh, Aberdeen, Dundee and Islay Jazz Festivals and are available to travel.

Brass Gumbo provide a huge dose of funk and jazz, with a distinctly New Orleans flavour - mixing upbeat, highly danceable second line style tunes and plenty of funked-up covers of everyone from The Beatles and Led Zeppelin to Basement Jaxx and Daft Punk with buckets of energy and a wall of brass!

With musicians from some of Scotland's top funk and street bands, Brass Gumbo have performed at events in Edinburgh, Aberdeen, the Islay and Dundee Jazz Festivals, Fjellrocken Festival in Norway, and for Kelburn, Insider & Belladrum Festivals, being broadcast on BBC Alba for the latter. They have performed to an audience of thousands as part of Edinburgh's Hogmanay celebrations, led public parades around Scotland, as well for clients including Edinburgh International Film Festival, Edinburgh Airport, Sky, Perth Racecourse & Buchanan Galleries (Glasgow).

They can perform completely self contained, with no power or PA system record, or mic-ed up onstage for bigger venues/audiences. Their set can be adjusted to suit a garden party atmosphere, or a high energy party set. Need a surprise band? No problem! The 6 piece version is completely mobile, with two percussionists for a full walkabout experience.

The band can also be scaled up to any size for a HUGE parade if required - they have experience of leading bands of up to 30 people!