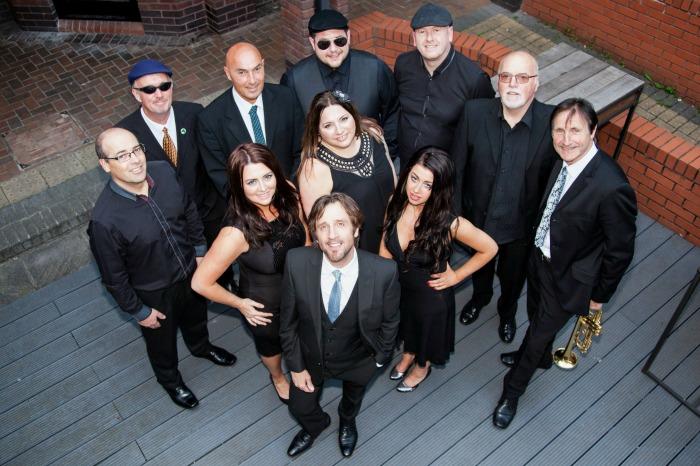 Big Mac’s were formed in 1990 as the house band for the legendary Hollywood Club in Newport. Within months of their formation The Commitments film was released and the band, being of a similar size and specializing too in 60’s Soul music, were inundated with work, constantly playing in every club, pub and eat house in South Wales. In a short time they were supporting The Commitments at a number of venues and were soon welcoming offers of work that took them to holiday camps, five star hotels and nightclubs both in the U.K. and abroad.

The line up is that of tenor sax, trumpet and trombone, bass, drums, guitar, keyboards, two dynamic female vocalists and charismatic frontman Mike ‘Big Mac’ McNamara. Mike is a Soul singer in the purest sense of the word, thus the band, though more than adept at producing the raw edged originals of Wilson Pickett, Sam and Dave, Otis Redding and James Brown, are also proficient in the more polished spheres of black music, Motown, Philly, Funk and those glorious vocal harmony drenched ballads. Vocalists, however, are only as good as their backing band permits and Big Mac has The Wholly Soul Band… easily the best in the business.

The Band has played Cairo, Tenerife, Germany and Dublin as well as settings here in the U.K. as diverse as The Cafe Royal and The Marquee Club. Such far reaching appeal is witness to the band’s adaptability and versatility.

The band is fully self contained with lights, p.a., transport, road crew and a highly efficient sound engineer capable of gauging the needs and requirements of every audience, venue and event.

To date Big Mac’s have appeared on the bill with a vast number of top names, from Edwin Starr, Jimmy James and The Vagabonds, Van Morrison, The Pasadenas and Jools Holland to Go West, Dodgy and Shed7.

Appearances on TV and radio shows, touring, playing, rehearsing and performing have all served to polish the bands act, repetoire and musicianship without ever diminishing its energy and enthusiasm. There are a great number of bands possessing a similar set and structure but none with such inspired authenticity. As awed members of The Commitments said… ‘We’ve found Wilson Pickett!’

From its very beginning the band has been immensely popular, building a rock solid reputation. They are a firm favourite at weddings, festivals, corporate events and social gatherings where a first class, energetic and wholly infectious good time act is required .

Hold Back the Night
Twisting the Night Away
Sugar Pie Honey Bunch
Walk Away Renee
Same Old Song
Reach Out
My Girl
Get Ready
It Takes Two
Wonderful World
I Heard It Through the Grapevine
Sweet Soul Music
Dock of the Bay
Soul Man
Hold On I’m Coming
In the Midnight Hour
Mustang Sally
Knock On Wood
I Want You Back
Too Busy Thinking About My Baby
Mony Mony
Keep on Running
Loco in Acapulco
Everlasting Love
Living in America
Love Train
Too Busy Thinking About My Baby
Land Of 1,000 Dances
Lucille
Long Tall Sally
Shake A Tailfeather
Higher and Higher
Carwash
Young Hearts Run Free
Superstition
I Second that Emotion
Under The Boardwalk
I Feel Good
Last Night
Private Number
Stand By Me
Build Me Up Buttercup
Everybody
You To Me Are Everything
Hey Girl Don’t Bother Me
Baby Now That I Found You
Gimme Some Loving
River Deep Mountain High
Last Night
Let’s Stay Together
Lean On Me
Sex Machine