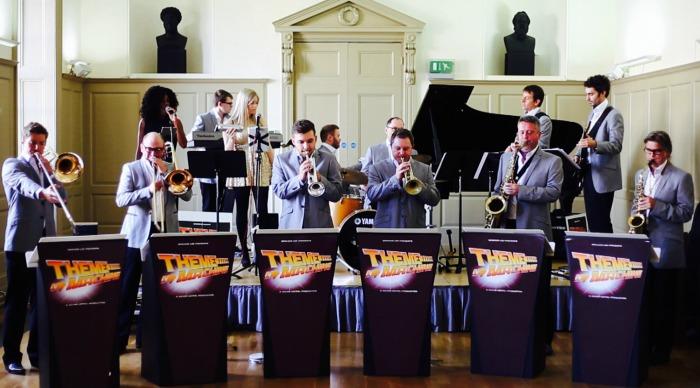 Based in London, Theme Machine debuted at Madame JoJos in Soho and have since been frequently playing at events all over the city as well as further afield.

Theme Machine boldly goes where no band has gone before, playing the sexiest film and TV themes from the 60’s to the present day in their own inimitable way.

A heady mix of some of the best session musicians in the country: a full five piece rhythm section; six butt-kicking horns; one top female vocalist and two backing singers. Clothed in the cool of Miami Vice and oozing the comic charisma of 007 himself, they take to the stage to perform epic movie themes such as Star Wars, Ghostbusters, Footloose, James Bond and Rocky as well as some of the most memorable foot-tapping TV hits of the period.

Theme Machine is more than the ultimate live function band. It is a full visual show including lighting, projection and the razzle dazzle of the red carpet. Follow the main event with a party set of cover songs, from Motown and soul through to present day rock and pop, guaranteed to keep any audience dancing all night.

Ideal for corporate events, launch nights, parties and weddings. Theme Machine is not just a band it’s a thrilling musical trip back to the future.