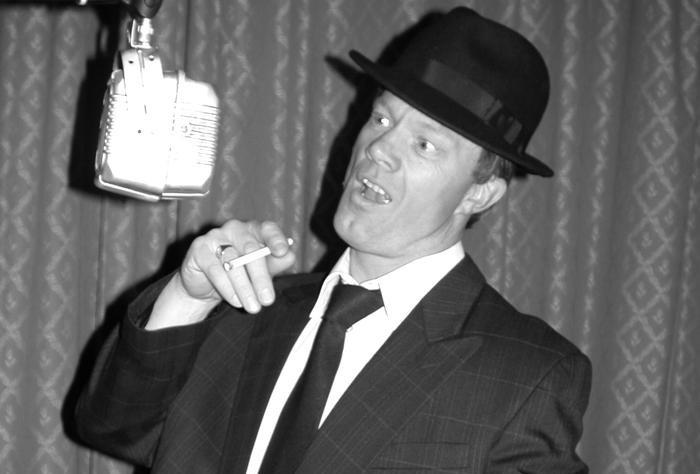 Old Blue Eyes Is Back

Steve is based in the Midlands and happy to travel for events.

Old Blue Eyes Is Back is a tribute to the legend that was Frank Sinatra performed by Steve Phillips. Coming from a musical family, it was only a matter of time before he began performing and having a distinct liking for swing music, it was inevitable that the tribute act would be Frank Sinatra, and he has been performing as the Governor for over 15 years.

With a wealth of experience performing many corporate events for such clients as Mercedes Benz, the Bellisconi Family, the Barclay Twins (Ritz hotel owners) and other top hotel groups was well as footballers Peter Crouch, Dion Dublin, Gareth Barry as well as a host of international performances as far afield as Italy, Switzerland, Croatia, Malta and Qatar.

He can can be booked for any event requiring a solo show with tracks or with a pianist up to a full production show with a big band and showgirl dancers.

Steve also has a grounding in acting and has appeared in shows such as Coronation Street, Happy Valley, Cilla, Shameless, From the Cradle to the Grave and many others.

Ain’t That A Kick In The Head
All I Do Is Dream Of You
All Of Me
All The Way
Angel Eyes
Bad, Bad, Leroy Brown
Birth Of The Blues
Call Me Irresponsible
Candy Man
Chicago, Chicago
Come Fly With Me
Embraceable You
Everybody Loves Somebody
Fly Me To The Moon
For Once In My Life
Have You Met Miss Jones
I Get A Kick Out Of You
It Was A Very Good Year
I’ve Got The World On A String
I’ve Got You Under My Skin
Just Haven’t Met You Yet
Let Me Try Again
Let’s Face The Music
Love And Marriage
Luck Be A Lady Tonight
Mack The Knife
Makin’ Whoopee
Me And Mrs Jones
Memories Are Made Of This.
Mr Bojangles
My Baby Just Cares For Me
My Funny Valentine
My Way
My Kinda Town Chicago Is
New York New York
Nice ‘N’ Easy
One For My Baby
Only Have Eyes For You
Pennies From Heaven
Somethin’ Stupid
Straighten Up And Fly Right
Strangers In The Night
Summer Wind
Sway
That’s Amore
That’s Life
The Birth Of The Blues
The Lady Is A Tramp
They Can’t Take That Away From Me
Volare
What Kind Of Fool Am I
Witchcraft
You Don’t Know Me
You Make Me Feel So Young.
Young At Heart
You’re Driving Me Crazy
You’re Nobody Till Somebody Loves You