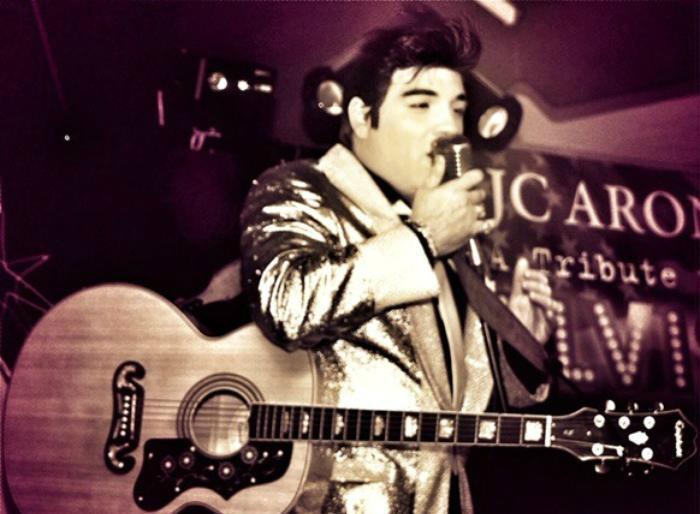 JC Aron travels throughout the UK performing at various events and functions.

JC Aron is the UK's greatest Elvis tribute act. He creates and captures the spirit of Elvis, his voice and costumes changes, reflect the period covered. He has been performing as an Elvis Tribute Artist for 11 years, and travels throughout the UK performing at various events, such as weddings, birthdays, open day's, pub's, restaurant's etc, to audiences of all age groups.

Covering all eras of Elvis, from the 50s & 60s and G.I Elvis, along with the Vegas style era JC Aron is a first class, professional performer and entertainer, who always gets an audience up on their feet.

Being Finalist of Battle of the South 2008, Finalist in Blackpool's European Championship, First place in London's Elvis Competition with Donna Presley Judging, and recently doing the Guinness World Record Elvis Wedding event on 10/10/10 in Nottingham, you can have confidence that you’re booking a quality performer.

The act is self contained, with full PA system, American flag backdrop, fully lit ELVIS sign, floor smoke, and smoke machines where permitted, along with a laser and light show. JC can also provide a disco service, an Elvis Karaoke, along with also performing a Billy Fury tribute.

"Just a quick thank you for sending us J C Aron for our fund raising event on Saturday. All the crowd at St. George's Hill thought he was absolutely amazing and by far the best Elvis tribute artist any of us had seen. We'll certainly be asking him back, as not only is he a great artist, he's also an extremely charming, helpful man and incredibly easy to work with. His attitude is entirely professional and his costumes, lighting and scenery are about as good as it gets. In addition he has a great voice (we thought he was playing a record at one stage, but in fact, he was just "warming up"!) . A really great evening, thank you all so much.

"It was great to have Jason as Elvis at the Sutton Xmas Lights switch-on this weekend. With the voice, the looks and the style of Elvis is was a really entertaining and engaging show. Thanks again Jason"

Don't Be Cruel
I Need Your Love Tonight
Treat Me Nice
It's Now Or Never
Girl Of My Best Friend
G.I Blue's
Did You Ever
Frankfert Special
Wooden Heart
Love Me Tender
In The Ghetto
Burning Love
Proud Mary
Johnny Be Good
Suspicious Mind's
Love Letter's
Home Is Where The Heart Is
....... and many, many more