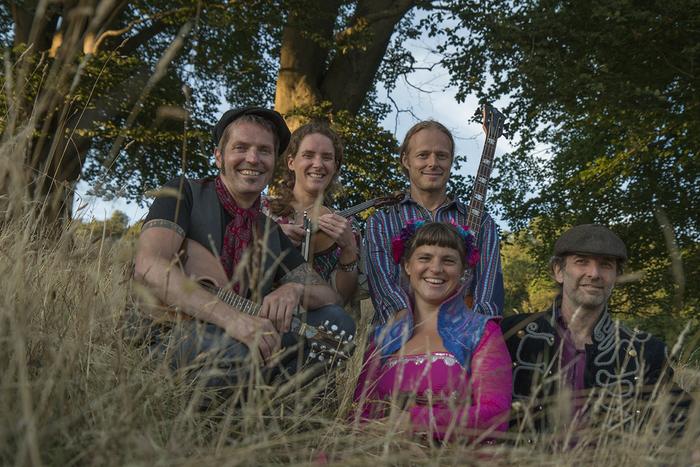 The band are based in Glastonbury, Somerset and frequently play across the South West, South Wales, the South East and London.

Dragonsfly are a 5 piece band of multi-instrumentalists playing Celtic and World Folk Fusion Dance music. Their repertoire consists of French/Breton inspired melodies and songs, Middle and Far Eastern songs and self penned uplifting songs with gorgeous harmonies. They play instruments such as bagpipes, mandolin, bouzouki, guitar, recorders and violin as well as electric bass and drum kit. This eclectic mix of instruments and sounds creates a magical, compelling atmosphere, urging audiences to be moved and to dance. Performances are exciting and uptempo as well as hearty and connecting. The skill of these musicians is well respected and the captivating vocals create a warmth and harmony which has been called life-affirming and enchanting.

Having formed in 1997 the band has performed at festivals, arts centres, weddings, private parties and other venues for over 20 years and are well versed in making people's events special. These years have also seen 3 albums production, many radio plays and collaborations with artists such as Michael Franti, Sheila Chandra, Page and Plant, Billy Bragg, David Allen (Gong), Banco De Gaia, Charles Hazlewood and more.

Dragonsfly can provide anything from a duo or trio background music to a full band dance experience. As well as getting people on their feet for free-form dancing, the band also provide the option of teaching the French and Breton circle and couple dances that go with the tunes they play. Indeed some performances are solely created for this purpose.