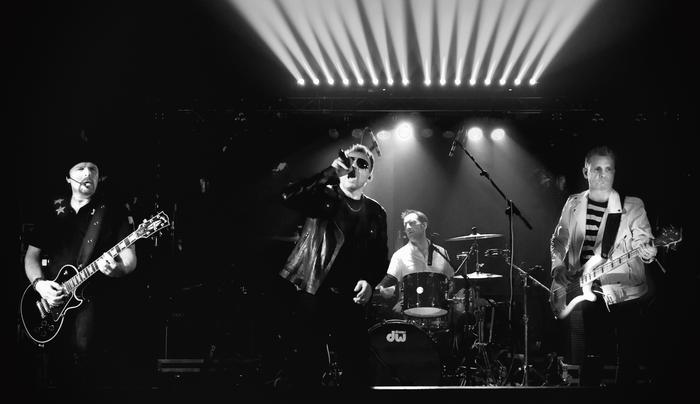 U2Baby are the band that are flown into Dublin to play at the U2 after show fan parties at the U2 40th Anniversary Celebrations in 2016 and are also playing in Dublin when U2 play Croke Park in 2017. Hailing from just west of London this is a huge compliment for the band who love playing in the home town of U2.

In addition they have played exclusive international venues such as the Salles des Etoiles (room of the stars) for Sporting Club Monaco and MAD Club in Lausanne Switzerland, one of the top night clubs in the world. Add to that sell out performances all over the UK U2Baby have clients including top tribute venues such as Fat Lils, Mr Kyps, The Roadhouse, The Diamond and the world's most famous club, the Cavern Club in Liverpool.

In 2016, in Dublin, Bono's best mate Guggi (a famous artist in his own right) was in attendance at the U240 parties. After the gig he said that U2Baby were "amazing". Ivan McCormick, an original auditioner for U2 who was present in the kitchen when U2 was formed was also there. He had to do a double take when he saw U2Baby on stage and said it transported him back to the early days.

This is a tribute band that take pride in recreating not only the sound of U2, not only the look of U2 but the attitude and the feeling of a live U2 gig. Clients have said they felt that the band turned a room into a stadium with their attention to detail. The way they deliver the show, and the quality of the supporting sound and light show really differentiates the U2Baby show. In addition they can easily integrate with other engineers at large festivals with their trusty sidekick U2D2 - the heart of the U2Baby technical setup.