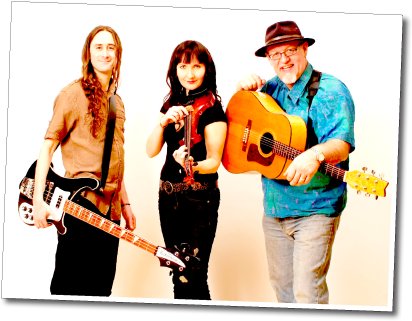 Selkie are based in Kent and travel extensively throughout the UK.

Ramona performs professionally and is well respected as both a singer and multi-instrumentalist. She has appeared at many festivals and prestigious venues including The Mean Fiddler; Weavers; The Mick Jagger Centre; The Winter Gardens; Trinity Theatre; Marlowe Theatre and Gulbenkian Theatre.

She has toured across Europe and beyond including France; Belgium; Switzerland; Sweden; Finland; Cyprus; Bulgaria and around New Zealand, picking up musical inspiration from her travels, alongside the Celtic and Eastern European influences stemming from her mixed Irish and Latvian family roots.

Constantly in demand and gigging in her own bands, as well as ‘guesting’ in numerous other bands, Ramona plays fiddle, whistles, mandolin and also branches out into solo work as a harpist. A dynamic singer she draws the audience into each song, retelling the lyrics with enchanting vocals and harmonies. She has worked on many varied recording and performance projects: including music for dance performances at the O2; supporting Suzanne Vega; performing gigs for Bob Geldoff and creating an arrangement of a Laurie Anderson song which she performed live to a special audience with Laurie Anderson and Brian Eno.

In addition to all of this Ramona teaches Celtic harp, fiddle and whistles, works with storytellers and sometimes delivers workshops at festivals.

Chris has amassed a colourful Irish musical history. He cut his teeth on the Irish circuit in London in the 70’s and since then has become something of a household name in the Kentish folk scene.

He has toured with concertina maestro Noel Hill and top traditional singer Niamh Parsons. He has played regularly with Co. Clare fiddler master and teacher Brendan Mulkere and the traditional group Slip Jigolos. He has also worked regularly with members of Alias Ron Kavana, the Popes, Four Men & a Dog and Sin E, as well as various members of the casts of Riverdance and Lord of the Dance.

Chris’ guitar style is both rhythmic and driving. His playing encompasses elements of folk, jazz, country, swing and blues. Despite never having any formal training in guitar, he has been lucky to receive tips and encouragement from some of the great guitar players associated with Irish traditional music; Arty McGlynn, Stephen Cooney and John Doyle.

Also an accomplished Irish concertina player, he has been passionate about this humble little instrument for many years. He has taken it to various parts of Europe (incl. Ireland) on a number of occasions and runs workshops at festivals and events.

An excellent singer in the Irish ‘Sean Nos’ style as well as contemporary, American and Blues, Chris’ vocals make a deep impression with their richness, depth and range. He is the holder of 2 All Ireland titles from the Fleadh Nua. He has made TV and radio performances, even appearing as the concertina player in the feature film Ladies in Lavender starring Judi Dench & Maggie Smith.

Dan’s dynamic bass playing underpins Selkie’s unique sound. From Punk to Prog, Dan has played in many bands over the years. His eclectic tastes have taken him on a musical journey encompassing Rock, Metal, Psychedelic, Ambient and Experimental music forms, alongside a deep rooted passion for lyrics and song writing.

Studying music theory and performance skills at M.I. in London crystallized his transition from guitar to bass. His broad musical background combined with great sensitivity and dexterity brings in a new dimension and a fresh inventive approach, pushing at the boundaries of traditional music to experiment with different grooves.

People often comment on Dan’s obvious enjoyment of the music and performing, which comes out in his happy, energetic, stage presence. Whether at a festival or a small venue - he just can’t stand still whilst he’s playing!

“Selkie are making waves on the folk scene and are establishing a loyal fan base with their infectious, groove-laden tunes and songs from Ireland, Scotland, England, Eastern Europe and America.