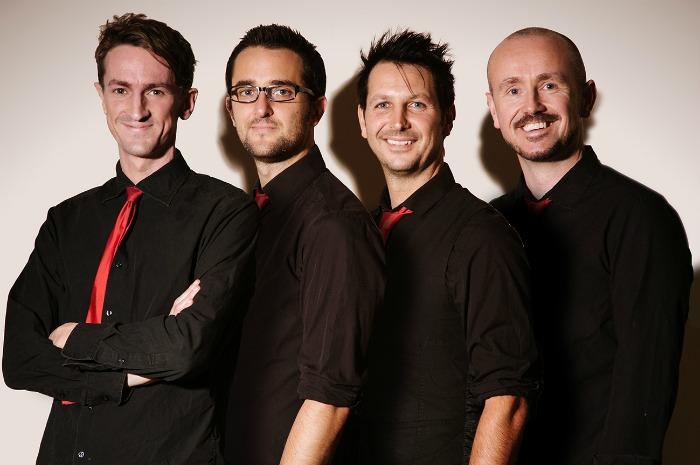 21st Century Riot are a high impact rock & pop band so if you're looking for something just a little different to your average function band, they are the perfect choice. With an authentic Indie sound, the band constantly update their repertoire to include the best of the current crop of guitar bands such as The Kings of Leon, The Black Keys and The Killers. They also perform classic hits from some of the great artists that have influenced them like The Beatles, The Rolling Stones, The Who and much, much more. Performing as a four piece party band (male vocals, guitar, bass & drums) these professional musicians put everything into the live show. So, whether you need a band for your Wedding, Corporate Event or Private Party, 21st Century Riot’s infectious energy, combined with a finely crafted set list packed full of hits, will keep your dance floor rockin’.

As an optional extra, the band also perform as an Acoustic Trio (male vocals with percussion, guitar & bass with BVs) giving their own laid back, bluesy feel to current and classic hits. This cool alternative to more traditional 'background' music is the perfect accompaniment to your wedding reception drinks or function dinner.

21st Century Riot are fully self-contained bringing their own PA and stage lighting as standard so you don't need to worry about organising any equipment.

Professional and experienced, the band’s musicians have played hundreds of weddings and private parties as well as corporate events for clients such as Jamesons Whisky, Nespresso, TopShop and O2, to name just a few. Plus with CVs and playing credits ranging from Amy Winehouse to Skunk Anansie's Skin, the band's personnel have played vast European festivals and some of the UK's leading venues, including Wembley Arena, Indigo2, Shepherd's Bush Empire and Cardiff's Millennium Centre. These musicians are not short of talent or experience!

And finally, the band are always punctual, respectful and super professional both on and off the stage - they are often praised for being a pleasure to work with. So, not only are you guaranteed a rocking performance from 21st Century Riot, they are also one of the friendliest bands you will come across.

"Just a note to say thank you all for treating us to an evening of wonderful music and entertainment. It was just what we had hoped for and more, we could not have been more delighted. In essence the two brilliant sets of music it hit all the right notes catering for a very wide age-range. We had many enquiries after the event as to how we found the band so I have been very happily referring them. We have been to many events recently and none of the live bands have come anywhere close to your standard, so thanks so much for saying 'Yes' to our initial enquiry.

When looking at bands on the internet, (I listened to what seemed to be hundreds), I drew up a short list, then listened to all the demo tracks and videos and put my top four in order of priority. This I then asked my husband to listen to (as it was his birthday), and his top four were pretty much the same with 21st Century Riot being number 1 on both lists! My only concern, once we had decided, was that you might say 'No sorry we don't travel to Shropshire', so I was very relieved and happy when you said 'Yes'! Also, the fact that the band were early and happy to set up themselves meant no hassle for us on the night.

The only downside is that it was over too quickly and I am trying to rack my brains to think of an excuse to do it all over again. Our youngest son does have a 21st to sort out, so you never know, you might be hearing from us again.

Just by way of thanks for your help Helen, and to Jay and the boys for driving all the way to Shropshire to play for us, a separate gift is winging it's way to you.

"21st Century Riot are an excellent band. We hired them to headline our festival themed wedding and their brand of energetic party rock was perfect for the event. The dancefloor was packed and buzzing throughout the 2 sets they played for us, and it was easy to see why as they filled up the big stage with charisma and charm. It was a fairly large, outdoor venue with a big stage which some bands may have found a bit difficult, but 21st Century Riot clearly loved it."

"We couldn't have asked for a more perfect and professional band than 21st Century Riot and our guests loved them! From the first to the last song they had everyone of all ages up on the dance floor, including my 93 year old grandmother who was a huge fan! The guys themselves were lovely and so friendly which made a real difference. We also made some song requests from their set-list which they were more than happy to accommodate which was great - we would recommend anyone to use 21st Century Riot to ensure an amazing time is had by all!"

"21st Century Riot were fantastic! The guys were really friendly and professional in every way so that everything was done smoothly and efficiently from setting up to clearing away. The sets were fantastic, great songs expertly performed. It was a really full, tight sound with great guitar riffs, excellent vocals and a beat to make the urge to dance impossible to resist… just what we were looking for! It was my son's 18th and the 150+ 18 to 20 year olds loved the music as much as the '40-something' contingent. 21st Century Riot are a really class act… we couldn't have been more pleased."

"Absolutely brilliant - pure quality. Just made the evening. Would recommend them to anyone! Thanks,"

"I have had nothing but praise and positive feedback regarding 21st Century Riot. They kept everyone at the event on their feet on both of their sets. They were really good and will be recommending them to all my friends. Can you pass on from all the members and guests of the Sergeants' Mess 4 RIFLES, a big thank you for entertaining us.

"Professional, flexible, fun and totally unique! If you want a successful party you need 21st Century Riot – It’s as simple as that!!"

"Hi Helen, Jay and the band were really, really incredible. I honestly cannot say enough good things about them on the night (and beforehand too!). We loved their play list, their whole energy and they just sounded great. I want to get the video back so I can listen to snippets of them playing again. Helen, thank you so much for all your help all the way through – it’s been amazing working with you and I cannot tell you how much we appreciate it! Our day was so incredible – we just want it all over again. Best wishes, Lisa."