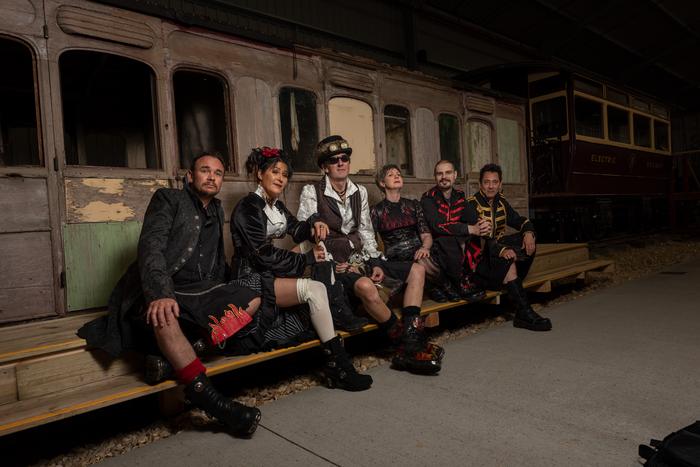 The band are based on the Isle of Wight but have regular performances at various large outdoor and indoor events such as the Isle of Wight Festival, Glastonbury, The Engine Shed ( for the world famous 'Welcome to the Asylum' Steampunk festival., The Town That Never was in Telford, The Royal Hall in Harrogate and much more.

Gritty, gutsy and incredibly unique in both their sound and style, Wight Hot Pipes, are fast becoming one of the most sought after music exports from the Isle of Wight, as their inimitable brand of alternative rock heads its way to mainland shores. With a prime slot at GLASTONBURY Croissant Neuf Stage this year (where the mighty Ed Sheeran made his Glastonbury debut), and their new album ‘Any Time It Rains’ released on 21 June, Wight Hot Pipes are making as serious imprint on the UK music scene.

Famous for playing at the BB King Club on Broadway in New York this band is unique in its appearance and its skilful arrangements of music for all tastes.

Also seen at the Isle of Wight rock festival the Wight Hot Pipes Celtic Rock band perform unique arrangements of traditional and modern music guaranteed to get the audience on its feet for an unforgettable party night.

These guys dress to impress and with their sexed up bagpipes and stunning vocal lead they never cease to entertain...

From Jigs and reels to Abba and Avicii , from Highland Cathedral to the Quo’s Rockin’ all over the World, from Chasing Cars and Clocks and even Dire Straits, you will want to get up and dance...

Wight Hot Pipes is an ideal band for indoor or outdoor events whether corporate or private and will provide a unique and unforgettable show that will bring the house down.