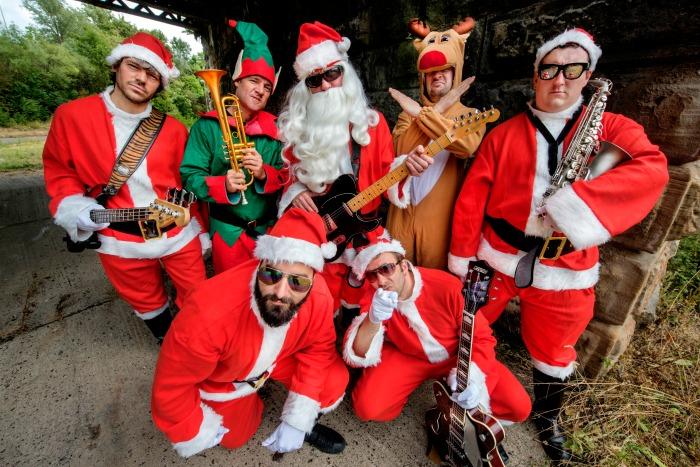 From the people that brought you The Banjo Lounge 4 this Christmas prepare yourselves for the funkiest and the funniest and the grooviest live Xmas party band you're ever likely to see....it's Santadelica and do they have a seasonal show for you!

It's a Red Suit Alert this December as it's going to be time to Get Up (cos you feel like being a) Snow Machine - there'll be musical presents galore in the shape of fat and funky bass, a two piece horn section, drum beats & breaks, wah-wah guitars, groovy keyboards all wrapped up in a mistletoe & mince pie sandwich of loving Funk-mas dance floor action.

Alongside classic Christmas songs from Mariah Carey, Slade and Wizzard (all done in the special Santadelica style) expect reworked soul, disco and funk - you thought it was 'Raining Men'? No, it's the 'Reindeer Men'...you guessed Sister Sledge said 'He's The Greatest Dancer', sorry, they meant 'He's The Greatest Santa'...

Xmas will be here early for everyone this year as Santadelica deliver the hits the way the Elves, Rudolph & all the other Funkateers up at the North Pole would want them - so they'll be 'Sleighin' Alive' with the Bee Gees, and they'll 'Rock me Father Xmas' with Falco and all with more foot tapping merriment than a Morecambe & Wise seasonal special...

Set 2
Santa Claus Want's Some Lovin' Vs A Real Santa For Ya – Albert King/Johnny Guitar Watson
My Name Is Slim Santa/I Like To Hoove It Hoove It) – Eminem/Real 2 Real
We're Reindeer Men (Hallelujah) vs Dear Santa – Weather Girls
Oh Santa (You're So Fine) – Toni Basil
Santa Claus Is Coming To Town – Jackson 5
Christmas in Hollis/Backdoor Santa – Run DMC vs Clarence Carter
Eight Days Of Christmas - Destiny's Child
Rock Me Father Xmas - Falco
Funkytale Of New York (will not be televised) – Pogues vs Gil Scot Heron
Happy Xmas (War Is Over) into I Wish It Could Be Christmas Every Day - John Lennon Vs Wizzard
All I Want For Xmas Is (Funk!) - Mariah Carey
Mega-End Set Xmas Medley
We Wish You A Merry Christmas