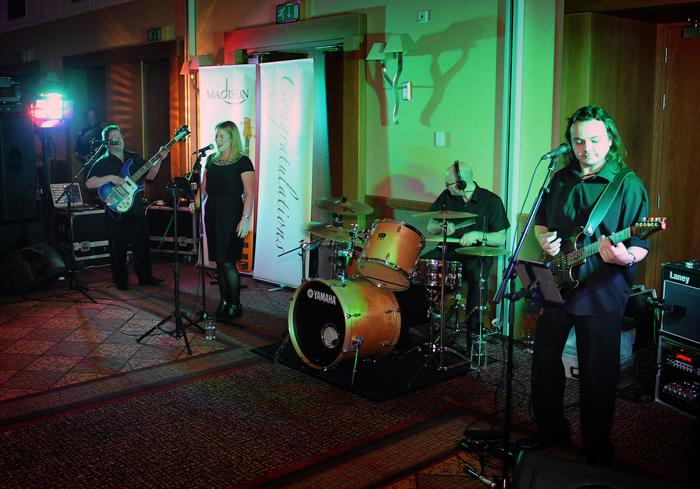 Based in Glasgow and regularly perform across Central Scotland, but can also travel around Scotland including Ayrshire, Loch Lomond, Fife, Tayside, Borders and Dumfries & Galloway

Having performed at nearly 2000 weddings and been shortlisted as Finalists in Scottish Weddings Awards for 2015, 2016, 2017 and 2018, it is safe to say Madison really do have a flair for Weddings... everywhere in Scotland!

Comprising of trained Degree level professional musicians, Madison is sure to turn your guest's heads and deliver a performance that will have your guests talking for weeks. It has been said, even years!

The Standard line up is fronted by a strong Female Lead Vocal supported by 2 other male Backing Vocals, one of which also delivers a strong Lead Vocal allowing versatility within the range of songs performed at your event.

Bass, Drums and Guitar make up the mainstay that is the drive behind the Madison Sound, with an aim to be as close to original as possible whilst allowing the musicians to be themselves and let their creativity shine through.

With Exceptionally good PA (Sound System) and Lighting that can be tailored to fit any venue, the quality of sound an lighting afforded will be shaped specifically for your venue choice.

The Range of music offered is wide covering all styles and genres, with songs from their ceilidh set, from swing to Motown, from rock to pop.... even some blues, funk and country in there too... any additions to set will be considered and potentially learned for your event. If the band don't cover it, then the FREE Disco and Dj certainly will.

All organised by a "coffee consultation", Madison aim to realise "all those little things" that will make your wedding or event Amazing.