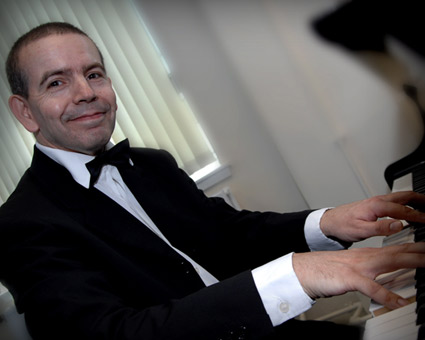 Richard is based in Dunfermline but regularly plays throughout Scotland and the rest of the UK when requested.

Richard Barriball is a pianist and DJ who can also call a Ceilidh, with over 24 years of experience. A capable and enthusiastic musician of considerable professional experience who has composed, arranged and performed in many diverse combinations and styles in many prestigious venues around the UK and abroad.

Arranged wind band music for Jane McDonald, Katherine Jenkins and Carley Stenson (from "Hollyoaks") who in 2008, sung to his band accompaniment for her vocal performance of Andrew Lloyd Weber's "Whistle Down the Wind" which was recorded with the Royal Marines Band of Scotland on their last album "A Night at the West End" and performed in Manchester.

Arranged vocal accompaniments for a host of popular soap acting celebrities from various programs for the annual charity concerts in Manchester's Bridgewater Hall by the RM Band and famous guests.

Arranged two pieces of wind band music for the Edinburgh Military Tattoo including a medley of three tunes from the BBC television hit series "Band of Brothers" which was used in the 2005 Finale where he wrote for the massed military bands, choir, fanfare trumpeters and bagpipes.

Co-wrote a bugle march called "Scottish Royals" which was used on the album of the same name by the Royal Marines Band of Scotland, and on the same album he composed "Caledonian Sunset" which uses the tune of Robert Burns "My Love Is Like a Red Red Rose"; as an accompaniment to the bugle call of "Sunset".

Had a number of arrangements performed in the Royal Albert Hall including the popular operatic song "Time To Say Goodbye" which was performed at the "Mountbatten Festival of Music"; in 2004.

Working for himself in addition to his full time career, he performed piano incidental music at the Forth Radio Awards in Edinburgh and also the Royal Yacht Britannia, both in the same week during Nov 2008, and has often performed on the Royal Yacht.

Medley Themes
Scottish Medley - Loch Lomond, Skye Boat Song, Dark Island, My Love Is Like a Red Red Rose.
Disney Medley - Can You feel the Love Tonight, When You Wish Upon a Star, A Whole New World, Beaty and the Beast, He’s a Tramp.
TV Themes - This Morning, Eastenders, Mash, Hill Street Blues, Taxi.
Weather Medley - Summer me, Raindrops Keep Falling On My Head, Somewhere Over the Rainbow.
Moon Medley - Clair de Lune, Moon River, Blue Moon, Fly Me to the Moon, How High the Moon.
Individual pieces
Angels
The Greatest Love Of All
Phantom of the Opera
Cava na
Ballad Pour Adeline
Misty
Just the Way You Are
Saving All My Love For You / Tonight I Celebrate My Love For You
Song for Guy / Your Song
Don’t Get Around Much Anymore / Sa n Doll
How Deep Is Your Love
Can’t Help Falling In Love With You
What a Wonderful World
This Guy’s In Love With You
Song for Sienna
Girl from Ipanema / So Nice
Danny Boy
A Nigh ngale Sang In Berkley Square
Dream a Li le Dream of Me
Close To You / We’ve Only Just Begun
Moonlight Serenade
Ge ng Sen mental Over You
Take Five
Sway
Witchcra
As Time Goes By
Eso Beso
True Love Ways
I Don’t Know How To Love Him
My Cherie Armour
Stardust
Endless Love
Edelweiss
At Last
All Of Me
The Way You Look Tonight
I Say a Li le Prayer
Just For You
Kiss Me Honey Honey
Never Knew Love Like This Before You Are the Sunshine of My Life Mood Indigo
Ain’t Misbehavin’
Beyond the Sea
Love Me Tender
Five Foot Two Eyes of Blue
You Need Hands
‘A’ You’re Adorable
With a Li le Help From My Friends Albatross
Being With You
Cabaret
Chanson D’Amour
I Want To Hold Your Hand
Que Sera Sera
O Sole Mio also known as It’s Now or Never (Corne o advert)
King of the Road
The Long and Winding Road
One Day In Your Life
Only You
Save Your Kisses For Me
She
Annie’s Song
Careless Whisper
Every Breath you take
Every Loser Wins
Goodnight Girl
Everything I Do
Something Stupid
Strangers In the Night
Unchained Melody
Uptown Girl
A Whiter Shade of Pale
Without You Woman
You raise Me Up Drive
Have I Told You Lately She’s the One
Up Where We Belong Walk On By
All I Have To Do Is Dream Smoke Gets In Your Eyes You’ll Never Walk Alone Hello
Eternal Flame Everything I Do Love Is All Around Mad World Hallelujah
Fields Of Gold Imagine
Lovin’ You
Nights In White Sa n The Sound of Silence Torn
Annie’s Song
Baby I’m a Want You
Blue Velvet
Can’t Smile Without You
Do You Know Where You’re Going To? Downtown
Ebony and Ivory
Easy
Holding Back the Years
I Guess That’s Why They call it the Blues
I Will Always Love You
Let It Be
Puppy Love
She Loves You
Ticket to Ride
Total Eclipse of the Heart
When I Need You
Time After Time