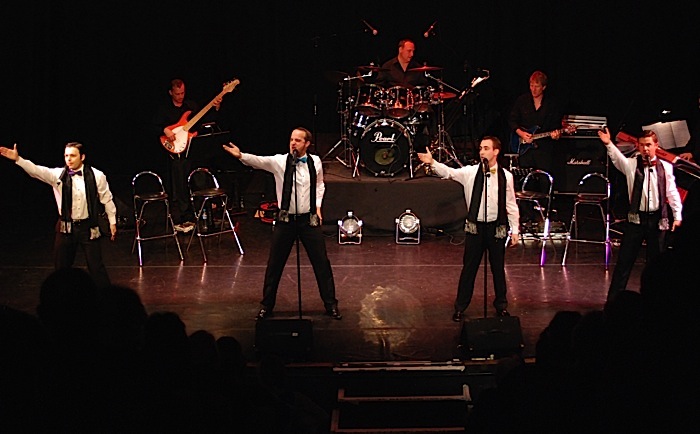 The band are based in London but regularly play throughout Scotland and the rest of the UK.

This Frankie Valli and The Four Seasons Tribute are guaranteed to have you dancing in the aisles, featuring many hits from both sides of the Atlantic: 'Sherry', 'Bye Bye Baby', 'Stay', 'Silence is Golden', 'Working My Way Back to You Babe', 'Oh What a Night', plus many, many more…

"These Guys are not just a great tribute act.. they are going to be stars in their own right!"

"Is this really a British act? They're as good as anything we’ve seen in Las Vegas!"

"Wow, we didn’t want the evening to end… the audience were dancing wherever they could find a space. It was as if there were international mega-stars on stage!"

"With four guys bursting on to the stage, resplendent in their pastel coloured jackets, great vocals, fabulous backing band, superb staging, first class choreography and excellent lighting… we were witnessing the amazing talents of THE EAST COAST BOYS. ...a great show… which even had me and my wife joining in the well deserved 'standing ovation' whilst waiving our arms and dancing in the aisles… just like the rest of the capacity audience! Not to be missed. Remember the name… THE EASTCOAST BOYS!" JOHNNY MANS, Editor, Encore Magazine

The numerous hits of Frankie Valli & The Four Seasons!

Ain't That A Shame
Beggin'
Big Girl’s Don’t Cry
Big Man In Town
Bye, Bye, Baby
Candy Girl
Can't Take My Eyes Off You
C'mon Marianne
Dawn
December 63
Don't Think Twice, It's All Right
I've Got You Under My Skin
Let’s Hang On
Marlena
My Eyes Adored You
Opus 17 (Don't You Worry 'Bout Me)
Peanuts
Rag Doll
Silhouettes
Silence Is Golden
Since I Don’t Have You
Sincerely
Stay
The Sun Ain't Gonna Shine (Anymore)
Walk Like A Man
Who Loves You
Why Do Fools Fall In Love
Working My Way Back to You