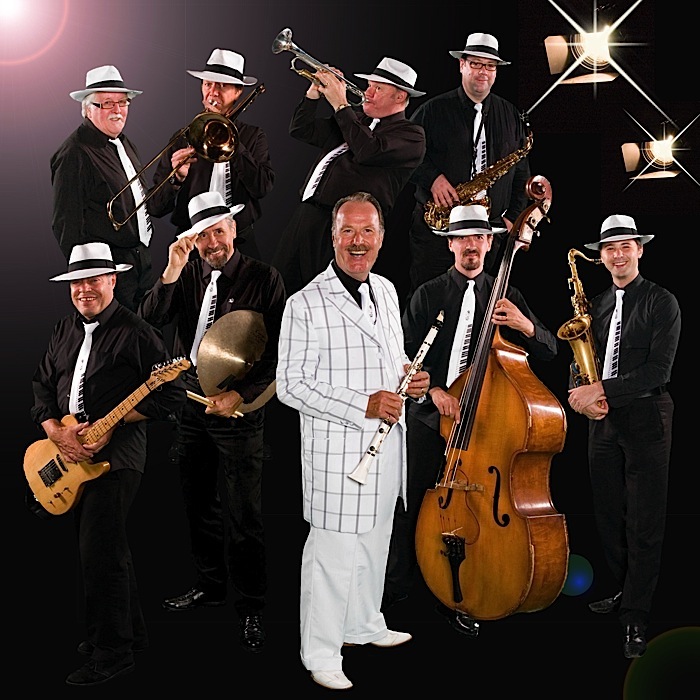 Based in Edinburgh but play regularly throughout Scotland and across the UK.

Based in Edinburgh, Scotland, and working world-wide, Fat Sams Swing Band occupies a niche in today's jazz-world that is virtually unique. Formed by Hamish McGregor towards the end of 1984, the band went 'live' on Valentines Day - 14th February 1985, and is one of the only professional standard 9-piece outfits working on a regular basis with a repertoire embracing - on the one hand the highly commercial 'jump-jive' music of Louis Jordan, Cab Calloway and Louis Prima, and the swinging sounds of Glen Miller, to the small and big band music of the middle-period Ellington, Basie, etc..

This breadth of repertoire, allied to highly-professional production, appearance and musical arrangements, permits the swing band to perform equally well in commercial function work (where the 'jump-jive' element predominates) and in Jazz Clubs, concert and festival work (where the instrumental element is greater).

Versatility and variety is the band's 'by-line' and is such that it offers a wide variety of musical sounds and styles in its performance. Allied to a strong presentation, the band is both a highly polished jazz-based Showband and a serious interpreter of mainstream jazz.

Whether you are putting together a specialist Jazz Festival or club programme, or require a lively and entertaining swing band for a function, dance or cabaret date, 'Fat Sams Swing Band 'can provide an exciting and suitably structured performance to meet your requirements'

- 'A Tribute to Louis Jordan', the King of Jump-Jive,

- 'An evening of Jumpjive - Boogie - Swing - Jazz - Blues - R & B, from Glen Miller and Duke Ellington to Fats Domino and the 'Blues Brothers'

Led by Hamish McGregor and his white Clarinet, the band has toured world wide bringing its lively and entertaining style of 'Jazz' music to thousands.

"After a week of coming back down to earth after my awesome party at the Rowantree last Saturday, I just wanted to say a massive thank you to you and the guys for the most amazing way that you performed for us!

All of you were totally superb and I can't thank you enough. The comments I've had from my friends about you have been fab!
I'd recommend you guys to anyone!
Thanks a million! And much continued success! You deserve it!"
Elaine Milne - July 2018