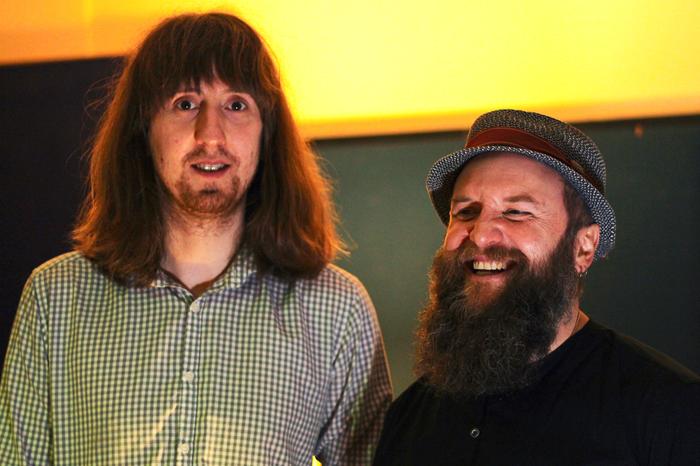 The duo is Edinburgh and they are happy to travel around Scotland for events or possibly further afield.

Edinburgh based acoustic duo Double Trouble have a wealth of experience playing in gigs and festivals all over the UK and in Europe.

Jools has been playing guitar for 30 years and has played in a range bands from an original band in his 20s to in later years blues and rock covers bands, a jazz band and a wedding and function band. Jools studied guitar and Musician's Institute's Guitar Institute of Technology in London. As well as his ability as a guitarist, he also has strong voice which has come to the front in recent years. Jools also plays occasional harmonica.

Donal is the driving force behind his own originals band Ded Rabbit he set up alongside his brothers (its a band of brothers!). Ded Rabbit regularly tour in the UK and in Europe. Donal is an accomplished and diverse musician. His original instrument is the bass, he is also fine guitar player and singer with an incredible ear and understanding for music which he developed studying music in Edinburgh to gain a BA degree in Music Performance from the University of Abertay.

The duo musically gelled right away and Jools needed to look no further to find a duo partner and had to disappoint the other 10+ applicants. The duo blend well with vocally harmonically and with the acoustic guitars with Jools doing the lead & rhythm guitar Donal and doing bass lines / rhythm guitar / fingerpicking. Jools also plays occasional harmonica on some songs and Donal uses a stomp box to add percussion and liven up the groove.

The songs the duo play are a mix of popular classic rock, blues, country and folk tunes of 50s, 60s, 70s ,80s up to the present day. They perform songs from artists such as The Rolling Stones, The Beatles, The Kinks, Creedence Clearwater Revival, Queen, Status Quo, Thin Lizzy, Johnny Cash, The Jam, The Clash, The Stranglers, The Coral and many more.

Since forming Double Trouble has been performing regularly. The duo performs with gusto, passion and genuinely love what they do. As they are such high calibre musicians Double Trouble enjoy improvisation playing off each other and can take the music to another level.