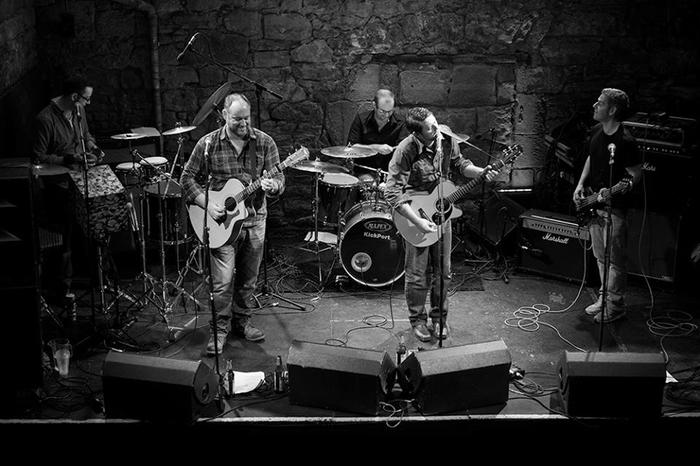 The Deadly Winters are all about good times & great music.

At their fullest, the band comprises a 6 piece powerhouse of Alt-Folk Rock, performing completely original compositions that cover the length and breadth of Folk musics palette.

To watch the Winters live, is to be taken through a journey of gung-ho seafaring, enduring the sweat and toil of mining for coal, planning revenge on a spurned lover or enjoying a bawdy and raucous night in a smoky, poorly lit tavern. At their more intimate, anything from a vocal & fiddle duo, and anything in between. This is an adaptable band.

History is key with the Winters. And although not above creating entire fictitious villages (2017 album Ravynstoun), or even entire worlds (2013 album Away Boys, Away) when they do focus on historical events, detail is all, be it their stirring composition about bassist Mikes own grandfather keeping nine men alive in a lifeboat after being sunk, or Edinburghs own Burke and Hare, the Winters will shy from no topic.

At their root though, the Winters are likeable, approachable, professional and fun.

You would never leave a Winters gig feeling short changed. And you would probably never leave without speaking to at least 3 members, or even possibly being invited onstage. Interaction with their audience is a craft. And the Winters have mastered that.

In addition to live music, personal song writing commissions and filming and editing their own videos the band now host their own podcasts.

The Deadly Winters repertoire consists of their own original music as well as the odd cover and some re-worked traditional tunes.
Please contact Freak Music for track list.