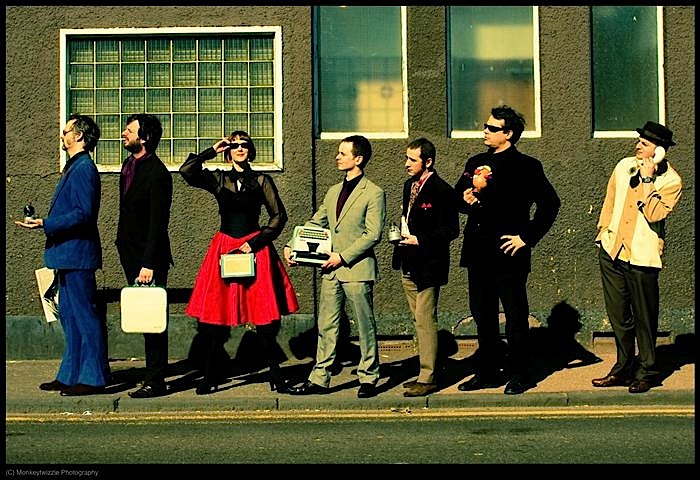 Based in Edinburgh but play regularly throughout Scotland.

The Counsellors are a seven piece extravaganza of a band. Their sound is classic lounge, with a twist of lemon, and an extra jigger of dry Vermouth. Comprised of vocals, three horns (Trombone, Trumpet and Saxophone), Guitar, Bass and Drums, The Counsellors swing (and we mean swing) from all over the world, with members from Australia, Canada, Brazil, Ireland and Scotland. Combine all these finger clickin' ingredients and you have a veritable fondue of grooves, taking musical tidbits from Dusty Springfield, Doris Day, Aretha Franklin, Patsy Cline, Sammy Davis Jnr and...The Carpenters.

They are headed by the delicious Miss B (Becc Sanderson), a singer with a smorgasbord of experience. An award winning performer in her native Australia, her notable triumphs include featured vocalist with the RSNO (Royal Scottish National Orchestra) Kings of Swing Big Band for their Proms performances at the Usher Hall in Edinburgh, and the Royal Glasgow Concert Hall.

Holding the wooden spoon as MC (that's Master Chef) is trombonist Chris Greive, Composer/Arranger/general Jazz God extraordinaire whose experience ranges from occupying the lead Trombone chairs with the SNJO (Scottish National Jazz Orchestra) and the European touring West End show The Rat Pack Live From Las Vegas, to playing with Ray Charles and Natalie Cole. It is his deft and scrumptious arrangements that make The Counsellors simmer and cook, from Swing to Samba to Funk.

The Counsellors' repertoire is peppered with classics such as Aretha Franklin's Respect, The Beatles' Do You Want To Know A Secret, Patsy Cline's Walkin', After Midnight and Honky Tonk Merry-Go -Round, Dusty Springfield's I Only Wanna Be With You and Sunny, and Nancy Sinatra's These Boots are Made For Walking. All ingredients effortlessly combined to achieve their sublime honeyed sound.

The Counsellors are here to swing your world. The tastiest of treats, with only the faintest whiff of the highest quality fromage.

Swing
Don't Mean A Thing If It Ain't Got That Swing
Don't Get Around Much Anymore
Stompin' At The Savoy
The Way You Look Tonight
Mood Indigo
My Secret Love
After You've Gone
The Best Is Yet To Come
Almost Like Being In Love
Bye Bye Blackbird
Come Rain Or Come Shine
Fly Me To The Moon
Goody Goody
Is You Is, Or Is You Ain't My Baby
I've Got You Under My Skin
L-O-V-E
Moon River
Mack The Knife
Night In Tunisia
Route 66
Straighten' Up And Fly Right
Sway
Witchcraft
Lounge
I Only Wanna Be with You - Dusty Springfield
Do You Want to Know a Secret - Beatles
Perhaps, Perhaps, Perhaps - Doris Day
What is this Thing Called - Frank Sinatra
Honky Tonk Merry Go Round - Patsy Cline
Walkin' After Midnight - Patsy Cline
Do Nothing 'til You Hear from Me - Duke Ellington
Don't You Feel My Leg - Dinah Washington
Close to You - The Carpenters
Psychedelic Barry (originally Psychedelic Sally) - Eddie Jefferson
Sunny - Dusty Springfield
Viva Las Vegas - Elvis
Turning Japanese -The Vapors
Physical - Olivia Newton John
These Boots are Made for Walking - Nancy Sinatra
Whatever Lola Wants - Sarah Vaughn
Spinning Round - Kylie Minogue
Can't Get You Out of My Head - Kylie Minogue
Toxic - Britney Spears
Oops, I Did It Again - Britney Spears
Hot Me Baby One More Time - Britney Spears
Poker Face - Lady Gaga
Hung Up - Madonna
Crazy - Gnarls Barkley
Take Me Out - Franz Ferdinand
Ruby - Kaiser Chiefs
Sexyback - Justin Timberlake
Tainted Love - Soft Cell
Grenade - Bruno Mars
TV/Film themes
Spiderman
I Dream Of Jeanie
Batman
Are You Being Served?
The Man From U.N.C.L.E
Hawaii 5 O
Meet The Flinstones
Mission Impossible
Pink Panther