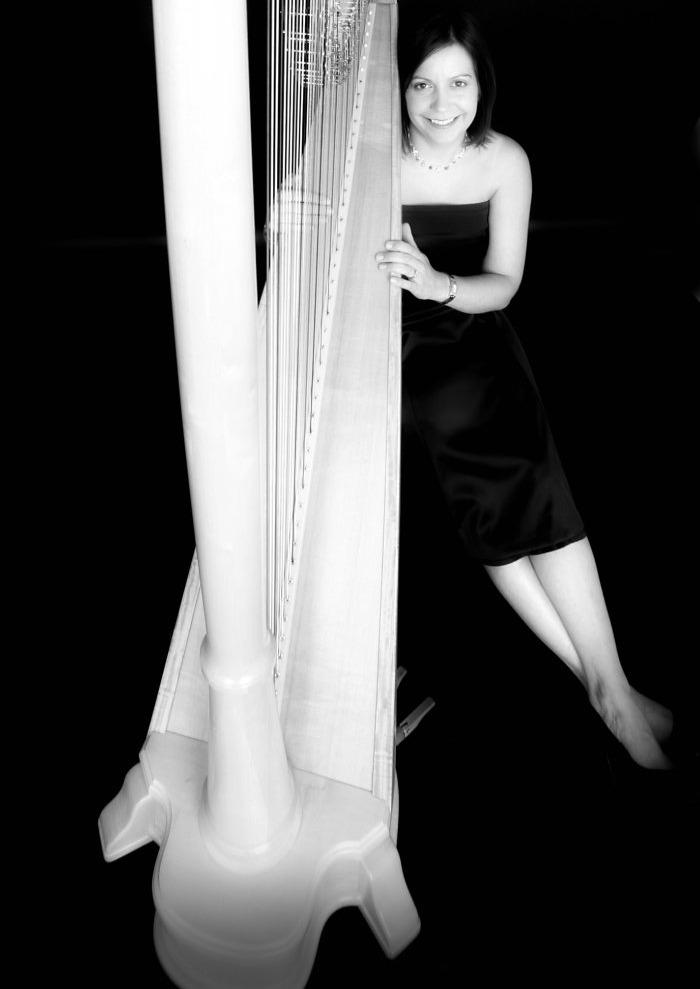 Based in Glasgow but will travel all over Scotland

Sharron has almost 20 years experience as a function and wedding harpist and is the recommended by many popular wedding venues. For many years, she held posts as harpist in residence at the Landmark Hotel, Trafalgar Hilton and the London Wetlands Centre and performed at events and weddings at many prestigious and diverse venues including the Hilton Park Lane, Waldorf Hotel, Harrods, Victoria & Albert Museum, Madam Tussauds, The Tower of London, Hampton Court, at the top of the BT Tower, under a tree full of peacocks and in the reptile house at London Zoo! Since re-locating to Scotland five years ago, she has played at numerous venues around the Country including Gleneagles, the Scottish Parliament, The Balmoral Hotel, House of an Art Lover, Cameron House, Loch Lomond Golf Club, One Devonshire Gardens, Doune Castle, Airth Castle, Culzean Castle and Marr Hall.

Sharron boasts a vast musical repertoire spanning from Classical music, Folk music, Musicals, TV, Film, Bollywood, Classic & jazz songs to recent pop songs. She is more than happy to welcome any musical requests, where possible, that are not on her list and is also available to play as a duo with a flautist, violinist or vocalist.

Sharron Started playing the harp at the age of 10 in her native country Wales, she continued on to study the harp at the Royal Northern College of Music and Trinity College of music. Since her study, Sharron has been in great demand as an orchestral, solo and chamber musician, playing regularly with many leading UK Orchestras, including the BBC Scottish Symphony Orchestra, Royal Scottish National Orchestra, Scottish Chamber Orchestra, Scottish Opera, Scottish Ensemble and Royal Northern Sinfonia. Sharron has also worked with the BBC Symphony Orchestra, Royal Ballet Orchestra, Trondheim Symphony Orchestra, held several posts in West End & touring Musicals and played for many famous artists such as Pavarotti, Sir Simon Rattle, Katherine Jenkins, Russel Watson, Lesley Garret and Evelyn Glennie at prestigious concert halls all over the World, including the Royal Albert Hall and the Usher Hall, toured as far afield as Los Angeles & Japan and often plays for radio broadcasts and session recordings, including film sessions at the famous Abbey Road studio’s.

Sharron is also in great demand as a teacher, currently lecturer in pedal harp at the Royal Conservatoire of Scotland and at Hutchesons’ Grammar School.

TV & FILM MUSIC:
Tara's theme - Gone with the wind
Somewhere out there - An American tale
Bright eyes - Watership Down
She's like the wind - Dirty Dancing
Love Theme[kissing you] - Romeo and Juliet
Cavatina - The Deerhunter
Up where we belong - Officer & a Gentleman
Lara’s Theme - Doctor Zhivago
Can you feel the love tonight - The Lion King
It had to be you - When Harry met Sally
My heart will go on - Titanic
Speak softly love - The Godfather
Everything I do, I do for you - Robin Hood
She - Notting hill
Out of reach - Gabrielle/ Bridget Jones Diary
Going Home - Local hero
Theme from Jurrasic park
Love is all around - Four weddings & a funeral
All by myself - Bridget Jones Diary
Moon River - Breakfast at Tiffany's
Breakfast at Tiffany's - Breakfast at Tiffany's
Come what may - Moulin Rouge
One day I’ll fly away - Moulin Rouge
Glasgow love theme - Love actually
Theme from Braveheart
DISNEY & CHILDREN'S MUSIC:
Beauty & the beast
A whole new world
Whistle while you work I
’ve got no strings
Little April shower
When you wish upon a star
Zip-a-dee-doo-dah
Bibbidi-bobbidi-boo
You can fly
He’s a tramp
Chim chim cher-ee
Let’s go fly a kite
You can fly, you can fly
Winnie the pohh
Under the sea
Supercalifragilisticexpialidocius
The bare nescessities
Ev’ry body wants to be a cat
The age of not believing
Part of your world
Be my guest
Siamese cat song
MUSICALS:
A little night music - Send in the Clown
Annie - Tomorrow
Chess - I know him so well
Singing in the Rain - Singing in the rain
Fidler on the roof - Sunrise, Sunset
Blood Brothers - Tell me it’s not true

Les Miserables:
I dreamed a dream
On my own
Drink with me
A heart full of love
Bui doi
Bring him home
Castle on a cloud
The last night of the world
My Fair Lady:
On the street where you live
Get me to the church on time