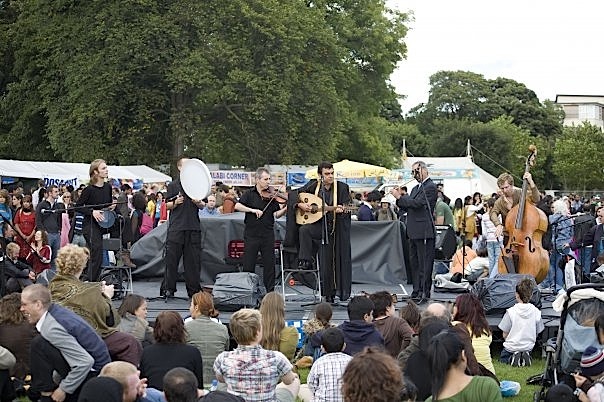 The band are based in Edinburgh but play regularly throughout Scotland and across the UK.

This Edinburgh based band consists of Iraqi, Scottish, and English musicians led by Mohammed Nafee (Iraqi singer & musician). The Babylon Arabic Band perform a selection of Mohammed's favourite Arabic songs throughout all Arab countries, which he performed at parties and celebrations in Iraq. Mohammed is now hosting parties and performing for new audiences around the UK with the talented musicians he has discovered here. The band consists of musicians who play Oud (a very popular musical instrument in the Middle East), Flute, Accordion, Double Bass, Cello and Percussion.

Mohammed Nafee – Singer and Oud player
Mohammed started his performances in Iraq at TV events and festivals as a singer and Oud player. When he left Iraq at 1998 he established Babylon Arabic Band in Scotland and started performing in the UK at festivals and TV shows here. The Scottish TV produced a documentary film about him (Then and Now) in 2002 and around that time he released his first CD (Samra). Mohammed regularly performs at festivals and continuously organises Arabian Night parties around the UK.

Joel Sanderson – Double Bass player
Joel performs Classical, Folk, Jazz, and World music with a variety of outfits on both Cello and Double Bass. He produces music from his home studio, making soundtracks for film and animation, as well as performing live, accompanying dance, performance art, theatre and storytelling. Joel is always looking for more collaborative work playing Cello and Double Bass (he also plays a host of other unheard of instruments!) or creating music in his studio. He is the Musical Director for the 'West End Festival' and co-ordinates other professional musicians to work on specific performances.

Lewis Powell - Accordionist
Lewis is a very talented musician, studying Folk traditional music in Newcastle. He's being playing since the age of 8, and is proficient in many different styles of music including Scottish, Arabic, French, Jazz and Klezmer Music. He currently plays with Babylon and Stobo Village Band with Martin Swan.

Marion Kenny - Flautist
Marion has spent the past twenty six years as performer, teacher and researcher of creative arts. Marion draws on her wealth of experience as a musician; dancer and actress, accompanying performances with Harps and Flutes. After gaining a degree in Music and Theatre Arts from Exeter University, Marion received a sponsorship to study music and dance at the Beijing Academy of Dramatic Arts in China and at the Academy of Music and Dance in Bali. More recently the Scottish Arts Council have supported performance and research tours of New Zealand and Australia.

Adam Reid – Percussionist
Adam plays different styles of percussion from Arabic to Jazz to French and Scottish. Studying Arabic language at Edinburgh University, Adam has been involved in hundreds local and international musical events. He played in many Europe and Arab countries with very popular bands, playing Tabla with Babylon Arabic Band in particular since 2004.

Arabic songs and music from all Arab countries.