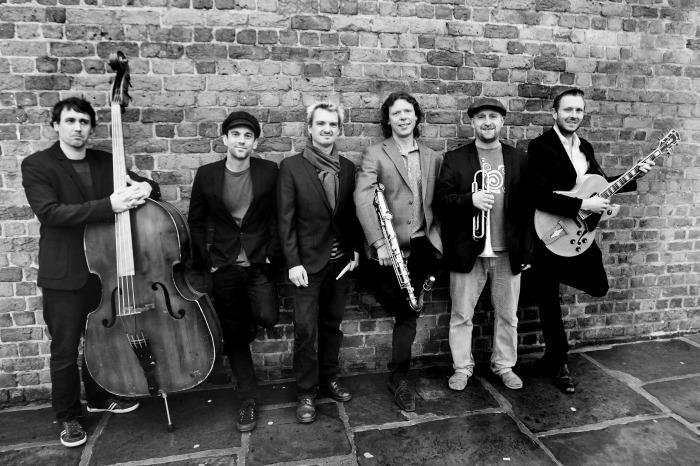 Stringer Jones and the Bosstones

The band is based in Liverpool and frequently play across the North West, Yorkshire and the Midlands.

Stringer Jones & The Bosstones are an explosive six-piece soul jazz combo from Liverpool, England. Featuring some of the North West's most established and finest musicians, Stringer Jones and The Buzztones transform a wide range of classic songs, spanning eighty years of music from the nineteen-thirties to the present day, with their soulful retro sound.

Having played together in various incarnations for over ten years, they produce a tight-knit sound which encompasses funk, blues, soul, jazz and pop. Elvis Presley, Michael Jackson, The Beatles, Amy Winehouse and Frank Sinatra are all thrown into the mix, and the result is a soul stew fit to feed any audience!

Most recently Rob Stringer appeared on the latest season of Peaky Blinders.

But don't just take our word for it! A recent booker wrote:

"Stringer Jones and the Bosstones played our wedding at the end of May.

They were absolutely brilliant from start to finish! They kept the crowd going for the whole set and reacted well to the general vibe of the wedding; everybody was up dancing and singing along throughout.

I did a specific request for a personal song for the first dance to be played but not the whole song (as it is not well known and wouldn't have gone down well with our guests) however they mixed it perfectly with one of the existing songs on their setlist and just made it work! We could not recommend them enough; they truly made our night and our first dance special."
- Ms Giverin - May 2019

Full set list
All of Me - Frank Sinatra
A Hard Days Night - The Beatles
Blue Moon - The Marcels
Blueberry Hill - Fats Domino
But Not For Me - Chet Baker
Can't Stop the Feeling - Justin Timberlake
Can't Take My Eyes Off You - Andy Williams
The Charleston / Bang Bang
Come Together - The Beatles
Crazy - Gnarls Barkley
Come Fly With Me - Frank Sinatra
Dock of the Bay - Otis Redding
Don't Look Back In Anger - Oasis
Dream a Little Dream of Me
Dreaming of You - The Coral
Everybody Loves Somebody Sometimes - Dean Martin
Fly Me To The Moon - Frank Sinatra
Forget You - Cee Lo Green
For once in my life - Stevie Wonder
Georgia On My Mind - Ray Charles
Get Lucky - Daft Punk
Golden Lady - Stevie Wonder
Hallelujah, I love Her So - Ray Charles
Happy - Pharrell Williams
Hey Ya - Outkast
Hit The Road Jack - Ray Charles
Hound Dog - Elvis
I Get A Kick Out Of You - Cole Porter
I Got A Woman - Ray Charles
I Need a Dollar - Aloe Blacc
I Wanna Be Like You - Jungle Book
I Heard it Through the Grapevine - Marvin Gaye
I Saw Her Standing There - The Beatles
It Had To Be You - Harry Connick Jr
I've Got You Under My Skin - Frank Sinatra
Johnny B Goode - Chuck Berry
King of the Road - Dean Martin
Kiss - Prince
Lady Madonna - The Beatles
Last Night - The Strokes
Little Old Wine Drinker Me - Dean Martin
Monkey Man - The Specials
Moondance - Van Morrison
Moon River - Andy Williams
The More I See You - Michael Buble
Mr Bojangles - Sammy Davis Jr
My Baby Just Cares For Me - Nina Simone
My Funny Valentine - Chet Baker
Nature Boy - Nat King Cole
New York, New York - Frank Sinatra
Norwegian Wood - The Beatles
Putting on the Ritz - Fred Astaire
She Said - Plan B
She's Electric - Oasis
Straighten Up and Fly Right
Sweet Child O'Mine - Guns N' Roses
Superstition - Stevie Wonder
Sweet Caroline - Neil Diamond
Sway - Dean Martin
That's Alright Mama - Elvis Presley
That's Amore - Dean Martin
The Way You Look Tonight - Michael Bublé
The Way You Make Me Feel - Michael Jackson
These Foolish Things
Ticket To Ride - The Beatles
Umbrella - Rihanna
Valerie - Amy Winehouse
You Never Can Tell - Chuck Berry
Your Song - Elton John
You're Nobody 'til Somebody Loves You - Dean Martin
You've got a friend in Me - Randy Newman
Witchcraft - Frank Sinatra
Wonderwall - Oasis