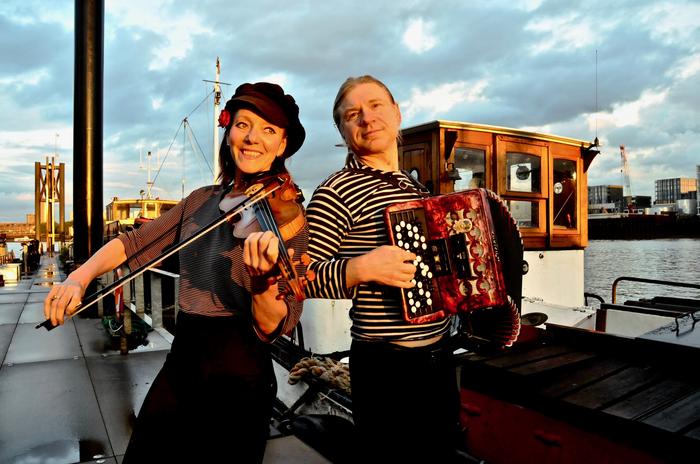 MAZAIKA are based in South East London and regularly play all over the Southeast.

Sarah and Igor formed Mazaika to combine the skills of their classical educations with the freedom offered by their improvisational abilities. They have thrown all their rich and varied musical tastes and into a melting pot and a unique style and vast repertoire have emerged. They are best described as a unique, classy, virtuoso violin/vocal/accordion cabaret. Their shows are full of Russian Soul, Tango Passion, Classical Virtuosity and sparkling humour, guaranteed to transport you from the Russian Steppe to the Gypsy Campfire and from the Opera house to the Montmartre cafe.

They can perform completely acoustic in the most intimate of settings, are great for popping up incognito among the guests at a dinner party, or fill a large stage with their presence. Their shows are highly visual and full of movement. Haven't popped the question yet? Sarah and Igor have accompanied many marriage proposals, in a pod on the London Eye, on The Orient Express, on a Venetian Gondola. They offer this as a service - as a live roaming act or the soundtrack to wedding proposals.

As well as their variety act, Mazaika is one of the leading exponents of Russian music in the UK. Their repertoire includes stunning arrangements of Russian and Gypsy favourites such as Kalinka, Dark Eyes, Czardas, Two Guitars, The Lark, Sabre dance and many more. For the discerning Russian client... an extensive repertoire of Popular Music from the Soviet Era from Vertinsky and Leschenko, to Magomaev to Antonov, DDT and Machina Vremeni. Plus songs and music from Soviet films as well as many romances, folk songs and Russian Gypsy songs. They are also familiar with French, Italian and other non-Russian songs particularly popular with Russian Clients. They can augment the group with additional Russian instrumentalists and/or Russian/Gypsy Dancers.

Mazaika has played for celebrities and notable private clients including Sean Connery, Sting, Roger Moore, Hal David, The Duke and Duchess of Westminster and the Duchess of Abercorn and her Pushkin Trust. They have worked with Antonio Forcione, Fascinating Aida, Nitin Sawhney and Akram Kahn. They have also played venues and festivals such as the Oxford Chamber Music Festival, Rheingau Music Festival, Russian Winter Festival in Trafalgar Square, Latitude, Glastonbury, Hope, Womad, Fire in the Mountain, Gossington International Gypsy Jazz Festival and many more.

"Hugely entertaining... the duo frequently brought the house down''**** The Scotsman [Edinburgh Festival]

"An evening of magic and passion" - The Independent.