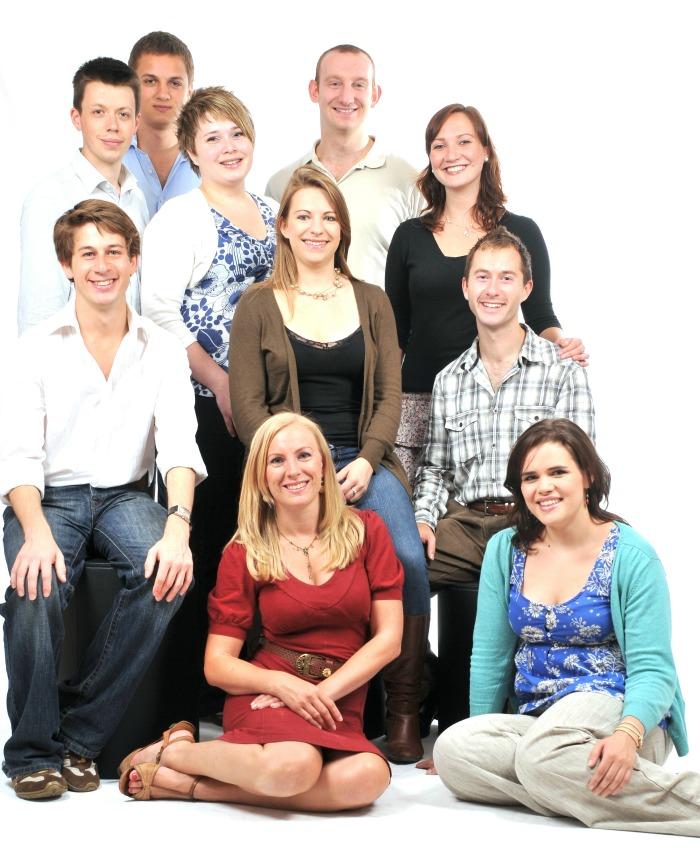 The group is based in London, but frequently performs nationwide and beyond.

Blossom Street is a highly versatile and dynamic vocal ensemble of professional singers in their twenties, which performs regularly on TV and radio as well as on the concert platform, and has recently released a commercial CD with Naxos.

The group performs a wide range of music tailored to the audience or venue - from jazz and pop arrangements to well-loved classical favourites to brand new commissions. In 2005, Blossom Street filmed a medley of Christmas carols for BBC2, which was broadcast during the snooker championship final; since then they have performed nationwide. In 2008, the group sang to Prince Charles on ITV1 as part of his 60th birthday celebrations, and the following year gave their debut in Queen Elizabeth Hall at the Southbank Centre as part of the Voicelab series, where they performed again in 2010. In 2009, they filmed for the TNT Show on Channel 4, were engaged to perform Judith Weir’s Missa Del Cid at St John’s, Smith Square, and gave concerts in Madrid. The following year they recorded two shows of the Sunday Half Hour for BBC Radio 2, as well as recording a CD of Christmas music for Union Square Music, and they made their BBC Radio 4 debut, broadcasting the Daily Service, which they now do quarterly.

Recent engagements include a social media campaign for Clintons Cards, filming adverts for sky+, HBO and Channel 5, as well as recording a CD of contemporary Christmas lullabies for Naxos. Entitled ‘Sleep, Holy Babe’, the disc was released last November, tracks from which featured on BBC Radio 3’s ‘The Choir’ and on Classic FM. They also performed live on BBC Radio 3’s ‘In Tune’, and their disc was announced as ‘Christmas CD of the Year’ on David Mellor’s New CD Show on Classic FM. The disc was CD of the Week on WQED Radio (Pittsburgh, US) in December, and was played on numerous other American radio stations. Plans for 2012 include performances in Sweden as well as corporate, festival and concert work, including the Edinburgh Fringe, and the recording of a second CD for Naxos, comprising folk song repertoire.

Although based in London, the singers are very willing to travel. The ensemble’s director would be delighted to suggest repertoire, but if you have a particular piece of music in mind, this can often be accommodated. The group also offers an arranging service; a professional composer will be happy to write a bespoke choral arrangement for your event or concert. In recent months, clients have requested choral arrangements of music by Elbow, Mariah Carey, Louis Armstrong, The Beatles, Michael Jackson, Puccini and Marvin Gaye. As well as its busy performance schedule, Blossom Street also works with a number of emerging composers, workshopping and recording their new music. The group is available to hire for rehearsals and recordings; if you are a composer who would like to hear their works sung, please contact the group via Freak Music.

“The music is a sheer delight and the performances good enough for me to predict that I shall be listening to this a good deal this Christmas and beyond’ Brian Wilson, MusicWeb International, reviewing CD ‘Sleep, Holy Babe’

“The singing is a capella throughout and absolutely first class ... This is well worth investigating whether you like to explore less familiar material or enjoy top class a capella singing or indeed both. And, as with all Naxos releases, this is outstanding value for money.” Steven Whitehead, Cross Rhythms November 2011, review of CD ‘Sleep, Holy Babe’

“Such a special treat and, for me, the best birthday present imaginable. I only hope that it was fairly obvious how much I enjoyed it!”

The Prince of Wales

“These recordings sound quite incredible”

“Without a doubt the best concert that we have attended in many years.”

“WHAT A PERFORMANCE!! You all were the talk of the evening and most of the next day. Thank you all for such a brilliant mixture of songs to please everyone. I wonder if you saw us Americans practically dancing in the aisle to the 'Friends' theme?! … Just perfect.”

“Many thanks for a superb session. I've had nothing but excellent feedback"

“I just wanted to say just how fantastic you all were on Thursday - EVERYBODY commented on just how amazing you were. We are both delighted with how the service went and I can't stress enough just how we were blown away we were with your voices.”

“Your performance was amazing and really enjoyed by everyone in the audience.”

“The Blossom Street singers were absolutely fantastic, we had no idea you were going so be so wonderful. Your singing in both the solo pieces and during the hymns quite transformed the service, and you easily provided the most compelling value for money of anything that we had for our wedding.“

Pop and Jazz arrangements include:
All You Need is Love
And So It Goes
Can’t Buy Me Love
Chili Con Carne
Don’t it Make my Brown Eyes Blue
Feeling Good
For Lovers
Get a Job
Goodnight Sweetheart
Holding out for a Hero
Honey Pie
I Got Rhythm
I’ll be There for You (Friends theme tune)
I’m a Train
Is You Is or Is You Ain’t My Baby?
Lullaby of Birdland
Michael Jackson Medley
Miss Otis Regrets
Money, Money, Money
Night and Day
One Day Like This
Our Love is Here to Stay
Over the Rainbow
Rescue Me
Satin Doll
Short People
Sit Down You’re Rockin’ the Boat
Son of a Preacher Man
Soul Bossa Nova (Austin Powers theme tune)
Sunny Afternoon
The Bare Necessities
The Way You Look Tonight
That Lonesome Road
When I’m Sixty Four
Whiter Shade of Pale
What a Wonderful World
Why do Fools Fall in Love?
Yesterday
You’ve got to Hide your Love Away
Christmas music includes:
All I Want for Christmas is You
Carol of the Bells
Have Yourself a Merry Little Christmas
Jingle Bells
Rudolf the Red Nosed Reindeer
Santa Claus is Coming to Town
The Christmas Song
We Wish You A Merry Christmas
Winter Wonderland
Wonderful Christmastime
A huge selection of traditional carols
Music for Weddings includes:
Bach’s Jesu, Joy of Man’s Desiring
Chilcott’s Irish Blessing
Delibes’ Flower Duet
Durufle’s Ubi Caritas
Fauré’s Cantique de Jean Racine
Franck’s Panis Angelicus
Mozart’s Ave Verum
Mozart’s Laudate Dominum
Pearsall’s Lay a Garland
Puccini’s O Mio Babbino
Rutter’s For the Beauty of the Earth
Rutter’s God Be in My Head
Schubert’s Ave Maria
Stanford’s Beati Quorum Via
Tallis’ If Ye Love Me