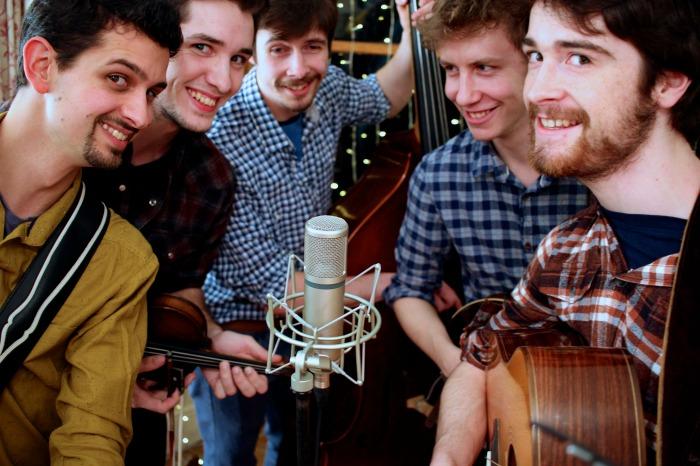 The band is based in Bath and frequently play shows across the UK and Ireland.

The Propane Brothers are a bluegrass super group from the UK – high octane solos, lonesome harmonies and trendy footwear. This five-piece band have an impressive list of achievements and awards between them having all performed internationally in acclaimed bands. The act is certainly more than the sum of its parts, an explosive live act not to be missed!

Reuben and Benjamin Agnew (guitar and bass) are two brothers from Northern Ireland and perform as part of Cup O’ Joe. Their tight, sibling harmonies and instrumental prowess have already made them 2015 BBC Young Folk Award Finalists as well as having made appearances on Irish television.

Kieran Towers (fiddle) becoming a name to watch out for on the UK and US bluegrass and old-time scenes, since having won the old-time fiddle contest at Gainsborough Festival in 2014, he recently released a duo album with Charlotte Carrivick of The Carrivick Sisters.

Joe Tozer (mandolin) has toured extensively in the UK, Europe and Canada with the band Carboard Fox. Most recently he appeared at the International Bluegrass Music Association’s World of Bluegrass event in Raleigh, USA as an official showcasing artist – a first for any UK band.

John Breese (banjo) is another familiar face on the UK scene. Since graduating from his Masters’ Degree on classical guitar in 2011, he has gone on to tour and teach internationally with the banjo and double bass in various outfits including Carboard Fox, The Carrivick Sisters, The Coal Porters and Thunderbridge Bluegrass Band.