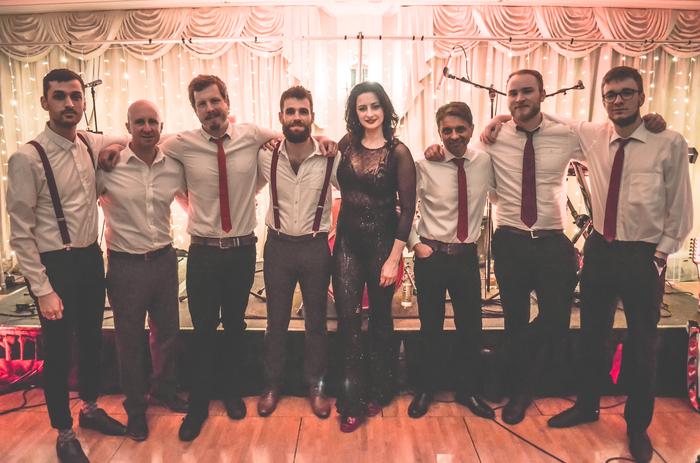 The band are based in Colchester, Essex and frequently play across Essex, Suffolk, Kent and London.

Frisco Monk are a high energy disco party band who play 70s and 80s disco floor-fillers, with a few funk and soul classics thrown in. The band is all about the live party vibe, no backing tracks, no gimmicks, just great live music that gets everyone dancing.

The standard 8-piece line up is fronted by a soulful female singer who belts out hits by Chaka Kahn, Michael Jackson and Sister Sledge with confidence and style, while the band holds down a groove that keeps the party going all night long. Frisco Monk boasts an impressive line up of outstanding musicians who are experienced, professional and exceptionally good at what they do. Their dynamic rhythm section comprises of drums, bass, guitar and keys, and the live horn section of trombone, saxophone and trumpet completes the authentic disco experience. The guitar, keys and horns take the occasional solo and in true disco style the band sing backing vocals throughout the set.

An unmanned DJ service and sound/lighting engineer are included in your fee, and other extra services can be added to your bill including acoustic sets, lighting and special song requests. You can view the band's unique sound & lighting packages in the photos section.

Pick Up The Pieces - Average White Band
​Good Times - CHIC
​Thinking Of You - Sister Sledge
​We Are Family - Sister Sledge
​I'm Coming Out - Diana Ross
​Young Hearts Run Free - Candi Staton
​I Can Make You Feel Good - Shalamar
​Give Me The Night - George Benson
​Street Life - Randy Crawford
​Celebration - Kool & The Gang
​Shake Your Body - The Jacksons
​Sir Duke - Stevie Wonder
​I Wish - Stevie Wonder
​I'm Every Woman - Chaka Khan
​Get Down Tonight - KC & The Sunshine Band
​That's The Way I Like It - KC & The Sunshine Band
I Want You Back - The Jackson 5
Jungle Boogie - Kool And The Gang​
Never Too Much - Luther Vandross
Love Come Down - Evelyn 'Chamapgne' King​
Car Wash - Rose Royce​
Rock With You - Michael Jackson
Best Of My Love - The Emotions
Blame It On The Boogie - The Jacksons
Superstition - Stevie Wonder
Play That Funky Music - Wild Cherry
Earth, Wind And Fire Medley​ - (Let's Groove, Boogie Wonderland, Shining Star, Sing A Song And September)
Aint Nobody - Chaka Khan
Le Freak - Chic
Got To Be Real - Cheryl Lynn
Give It Up - KC & The Sunshine Band
Somebody Else's Guy - Jocelyn Brown
Aint No Stopping Us Now - Mcfadden & Whitehead