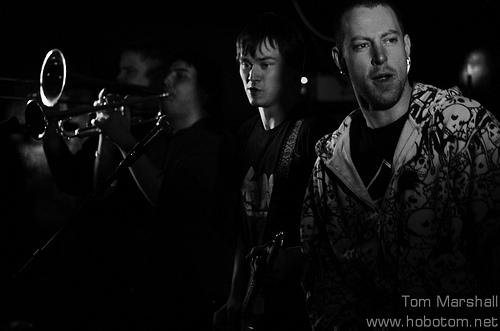 China Shop Bull are based in Leeds and they play regular shows around all England, Scotland, Wales and anywhere else.

China Shop Bull play a lively 7 piece mix of ska rave and drum and bass, recently releasing a debut album ‘Rave To The Grave’ though Code 7 Music. They have been on the festival, punk and party scene since 2006, playing with acts as diverse as Dreadzone, The Dub Pistols, The Beat, Sonic Boom Six, Inner Terrestrials, The Skints, Pama International, Goldie Lookin Chain, Eat Static, Voodoo Glowskulls and Subsource.

Building a fast growing following with their infectious sound and lively shows, China Shop Bull have been invited to festivals such as Rebellion,