To the home of Freak Towers today for a wee selection of Edinburgh based jazz and swing acts, ideal for laid back music for drinks receptions. We’ve been working with all these acts for years and can highly recommend them for any events where this style is required.

The brilliantly named Viper Swing (above) are an Edinburgh based vintage and gypsy Jazz band comprising of outstanding musicians who can go out as their standard four piece or as duo, trio or even a five piece band. Their Guitar and Violin led melodies and Waits-esque gravelly vocals effortlessly evoke the spirit of 20s and 30s Paris, with a repertoire that covers not only the great Django Reinhardt but also the great American songbook.

Champagne (bottom) comprise the cream of Scottish musical talent and will add a little cool and seriously sophisticated background music to any special event. Perfect for weddings or corporate drinks receptions or any other event you require background jazz. Led by Hamish McGregor who’s best known best for his ‘white clarinet’ and leader of Edinburgh’s famous Fat Sams Band, Hamish has been a mover and shaker in the Scottish music scene for neraly 50 years.

Fronted by Ali Affleck (right) who was awarded the prestigious ‘Best Jazz Vocalist 2014/15’ by the Scottish Jazz Federation, Speakeasy Swing have a fondness for early Hot Jazz and the upbeat ‘Tin Pan Alley’ movement. Working the not so standard tunes of old in with the Great American Songbook, the Speakeasy Swing; repertoire is energetic and lively – with some sassy and seductive numbers thrown into the mix just for fun . With comparisons to Peggy Lee and the vocal styling of of an young ‘optimistic’ Billie Holliday…vocalist Ali Affleck loves to share the stage and revels in the artistry of her 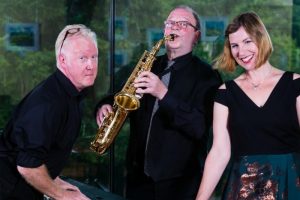 Radio Pachuco (below right) came into being in 2011 as the house band for Saturnalia cabaret, an ill-fated production involving some of Scotland’s greatest performers. Since then the band have become increasingly busy, performing regularly at clubs, bars, weddings and other functions across central

Scotland. The original plan for Radio Pachuco was to play a classic set of swing and jazz standards, however as time progressed the group have expanded their repertoire to include a large selection of 1950’s music, modern songs in a vintage style and movie themes.