If you and your guests’ taste in music lies on the lively side of Irish such as The Pogues, The Dubliners, The Saw Doctors, Floggin’ Molly, The Dropkick Murphys, Brendan Shine, Nathan Carter, The Fureys and even the odd Foster and Allan now and again, then The Wild Murphys (above) is the group for you! They’re not a folk band, they’re not a ceilidh band, they’re not even a rock band, they are an out and out Irish music group, playing some of the greatest Irish classics in their own inimitable style, no-one is doing this selection of songs in this lively a style anywhere in the UK today!

The Mojo Rising (left) are a London based wedding band that specialise in Soul and Disco music. The band have all the ingredients to get the party started and the mojo working. The band’s singers have a number of years’ experience, performing in West End productions such as Fame, Grease and The Blues Brothers, so they know how to put on a good show! The rest of the band is made up of experienced musicians who have played at notable venues such as Ronnie Scott’s, The 100 Club, and on BBC Radio. The band have performed at a variety of venues, such as Kew Gardens, The NEC – Birmingham, The Clothworkers Hall – London, University College London and the Sports Bar & Grill – Canary Wharf and they always make it a night to remember. 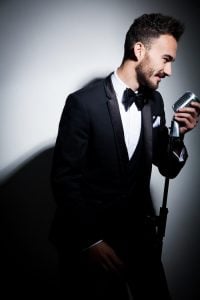 John Prescott (right) is fast gaining a reputation as one of the most exciting swing singers to emerge in the south west in recent years. His smooth vocals encompass a wide repertoire from the great American songbook, with influences from artists such as Frank Sinatra, Dean Martin, Nat King Cole and, more recently, Michael Bublé and Robbie Williams.

​From parties and weddings to corporate events, John P creates a classic atmosphere and sets the scene for a special celebration. His experience shines through, having performed in established venues across the UK such as Theatre Royal in London and Bristol Airport.

Meditians (below) is a wedding duo comprising guitar and voice, using looping technology to create a bigger sound. They perform more than 40 covers from soul, classical, pop to hiphop more. The singer Leo is influenced by Lauryn Hill, Ella Fitzgerald, Stevie Wonder, Otis Reading, Amy Winehouse and many others. She was trained in classical at the Conservatory of Geneva and Modern at the Complete Vocal Education. Guitarist Dimi has a masters in music from Goldsmith University of London and both of them are passionate about music, and like to spend a lot more of their time sharing it. The list of covers is always being added to and the act will also happily take requests.

If you and your guests’ taste in music lies on the lively side of Irish such as The Pogues, The Dubliners, The Saw Doctors, Floggin’..." />