Chester based Western swing band The Rip Roaring Success (above) are the hottest band east of El Paso. It features Wild Miss Lucille on double bass, Miss Jay on the fiddle and the hillbilly vocalist Rusty on the six string flaming guitar. Folk at venues and festivals up and down the country will testify that when you want the prairie set on fire with jumpin’ hoe-down tunes then there ain’t no success like a rip roarin’ one.

Hailing from the bustling streets of Manchester, Taylor & the Mason (right) are a folk and pop girl group comprised of three really good friends with a mutual love of music. Becky Taylor Sharman (guitar/vox), Sally Mason (guitar/vox) and Lorna Blundell (percussion/vox) all met a few years ago after running in the same musical circles in and around Manchester. Becky and Sally, already a duo under the title Taylor and the Mason, became acquainted with Lorna whilst playing the open mic circuits around the city. All three quickly discovered they had similar musical interests (and a shared love of sequins). They soon got to writing original music together, as well as learning covers of all genres, from folk to rock, to perfect their skills. With influences as broad as Dusty Springfield and Daft Punk, they have mashed all of their inspirations together to come up with their own unique take on music. Whether it’s playing their own original music or covers, they have a distinctive sound which is fuelled by live instruments and 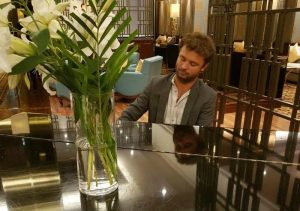 Rufus Quickenden (left) is a solo pianist blends a unique mix of jazz, pop and classical repertoire, able to suit any sort of function. Having such a large repertoire allows the performer to excel in intimate venues, where the audience listens attentively to every note played, as well as to larger groups providing background music to create an aura of sophistication. After graduating from Leeds College of Music, the performer has played all over the world, including Dubai and on board cruise ships, as well as all over the UK in a wide variety of venues, including but not limited to theatres, 5* hotels, at festivals, in bars and many weddings. He is able to bring along his own equipment, allowing you to turn any venue in to a sophisticated piano bar, even if there is no piano already at the venue.

Holly & The Hotrods (bottom) are a female-fronted, four-piece rock and pop covers band with a varied, imaginative set list and a unique and distinctive sound. Whether it’s classic tracks, fresh new chart-toppers, dance floor-fillers or indie anthems, this act can deliver them with exceptional verve and energy that is guaranteed to get people on their feet. Never predictable, always memorable. While they would never completely re-write a timeless hit, the band are more than ready to put a new spin on a classic. The group also have a canny ability to think outside the box when it comes to track selection, but don’t worry, every part of their two one-hour sets has been meticulously crafted with great attention to detail.

Bristol based Josh Doughy (right) has been playing the Kora for most of his life, studying under some of the best Kora players from all around the world in the world from a very young age and

being allowed to immerse himself in the Malian culture to further develop his craft. Josh’s experience ranges from touring around England and France playing to large audiences at festivals such as Womad, Small Nations, Shambala and Boomtown to playing for more intimate audiences at weddings and private functions. Having dedicated his early years learning traditional Kora music, he has now created his own unique style which incorporates elements of both African culture and his own Welsh heritage.

This sought-after cellist, Maggie Swan, is a popular choice in the solo classical acts category. Maggie’s experience as a performer and her likeable manner shine through in her playing. She liaises closely with clients before the event to create the perfect musical ambience, which includes the Bach solo cello suites, sonorous classical melodies, jazz standards, film, Disney and pop tunes. Special requests are welcomed. Based in Manchester, Maggie travels throughout the UK and abroad. Her work as a freelance cellist has included performing with some big names (Elbow, Snow Patrol, Emeli Sande, Jools Holland), as well as working for music charities (Music in Hospitals, Lime Arts), teaching, and playing with bands, orchestras and chamber ensembles.

Chester based Western swing band The Rip Roaring Success (above) are the hottest band east of El Paso. It features Wild Miss Lucille on double..." />