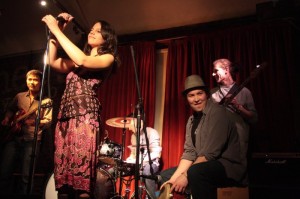 My favorite act to join Freak Music this week has to be West London Jazz Quartet. I can not pretend to know a great deal about jazz but I do know this is great stuff. It’s laid back and relaxed but you also find your self nodding along to some of the slow subtle groves. The long organ solo’s are awesome and the lead vocals [Daida Carbonell] are smooth and beautiful, in fact I love everything that is going on with this act! It defiantly worth stopping by their profile and listing to ALL there songs!

Other acts to join Freak Music this week include:

Sarah Louise Ings – Think Lady Gaga on a date with Plan B, going to a party at Mark Ronson’s house and you’re almost there. Sarah’s EP “Sarah’s Secret” has received fantastic feedback from as far as Moscow. Bringing in the talent of Dj Kelz Clarkson (One of the UKs top four up and coming DJs as rated by Movida Corona) and Sarah’s entourage of dancers you really do have a show that will blow your mind

Huggy Flares – Based in the Beds Bucks and Herts area, five-piece wedding, party and function band Huggy Flares has become established as one of the area’s funkiest and fun soul and disco bands, performing classics from the legends of the 60s soul era, plus 70s funk & disco favourites (and a couple of more recent hits when the mood takes them as well!).

What The Funk began in the summer of 2010 and is the brainchild of guitarist Rich Hughes, bassist Richard Glover and drummer Ben Thomas. The 3 funksters then stumbled upon the very talented keyboardist Charlie Swift and the incredible voice of Auriol Proudfoot to front the band

The Anvil Ceilidh band offers a full traditional Scottish Ceilidh – with caller, covering all the major dances and some unusual but fun aternatives too.

Alyss Rose is a vocalist specialising in jazz and bossa nova. She began studying music in 2000 and since then has performed with many bands and accompanists. Alyss regularly performs at weddings, parties, restaurants, corporate events and even festivals. In The Alyss Rose Duo she performs a selection of jazz, blues, soul, Latin and pop songs. Alyss is normally accompanied by a guitarist, but can be accompanied by a pianist if requested.

Introducing one of the busiest party bands in the UK! The Dave Speakman Band, combined with their dynamic stage presence, flawless musicianship and nonstop party classics will be the icing on the cake at your special event.

The Cover Cats set list covers classic party material from 60’s to current chart and will have the dance floor at your event packed from start to finish! The band take great pride in being professional and easy to work with, as well as being flexible and helpful to ensure that your event is enjoyable for you and your guests.

Freedom of Expression (F.O.E) – A combination of early-teen friendship, university discovery and old-fashioned happy circumstance lie at the heart of the formation of this tightly cohesive 5-piece group. This ensemble of varied cultures and mixed musical tastes is the catalyst for some of the most original and eclectic sounds of recent times.

Written By
pauldoffman
More from pauldoffman
Presenting… the statuesque Elle and her stunning pint-sized Pocket Belles. Soulful and...
Read More