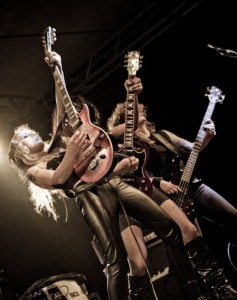 Is the world ready for an all female AC/DC tribute act? If not it’s a little late as, to steal a line from Poltergeist, they’re here. They’re called Back:N:Black (of course they are, what else?) and hail mainly from mainland Europe and are currently looking for work in the UK. 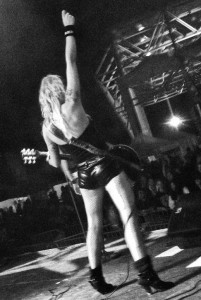 Despite only going for two years, the band has already played big festivals in Switzerland (this year’s Rock Oz’Arènes with Alice Cooper, Gotthard, ZZ Top, Iggy… etc. ) as well as headlining the Verbier Bike Fest for the second year in a row. With two of the band members hailing from the UK, we want to establish the band for corporate events and professional entertainment in the UK.

One of many unknown facts about the original band is that grown up schoolboy Angus Young and his brother Malcolm were born in Glasgow not Australia and the sadly missed Bon Scott was born in the not-particularly-rock’n’roll Forfar, (which happens to be in Angus) the latter taking his name from the phrase, Bonnie Scotland. And if you want to see a great clip of the great man playing the highland pipes, look no further. 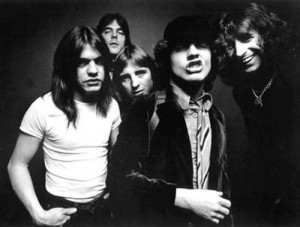 After Bon’s untimely death in 1980 the band unsurprisingly considered disbanding but Bon’s parents implored them to carry on. Thankfully they agreed and, enlisted the vocal talents of Geordie lad, Brian Johnson. In July of that year they released the classic, Back in Black which went to become (dpending on which source you believe) either the 2nd or 3rd greatest selling album of all time. So I guess Mr and Mrs Scott were vindicated.