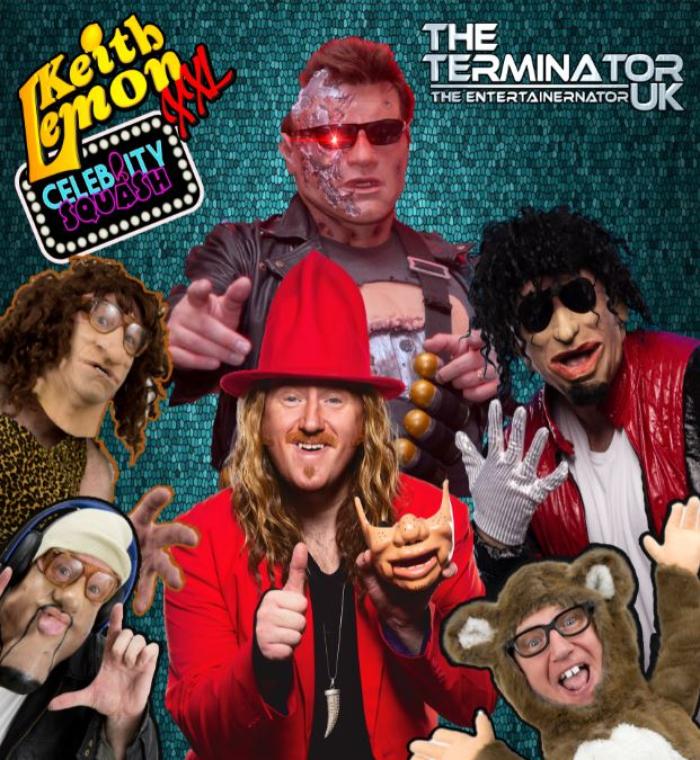 Stu Arnold is based near Derby and Nottingham but is happy to travel for the right event or gig.

Following 10 years development through varied experiences at all types of events from weddings, corporate events or comic cons

Since 2014 to the present he has appeared at Arnold Schwarzenegger’s corporate events as the Meet and Mingle.

also appearing at festivals and night Clubs and weddings

• An Evening with Arnold Schwarzenegger (2014)

• An Exp with Arnold Schwarzenegger Edinburgh and Birmingham (2016)

• An Exp with Arnold Schwarzenegger Birmingham (2016)

• An Exp with Arnold Schwarzenegger Leeds and Birmingham (2017)

• An Exp with Arnold Schwarzenegger ICC Wales and Birmingham (2019)

A love of all of the characters created by Leigh Francis lead to the evolution of a Bo Selecta Tribute and a Keith lemon style character who is a total sound alike with quick wit with a the enthusiasm to make you smile.

The ultimate live tribute to “Celebrity Juice.” that is interactive fun you to be a star.

The games are all inspired by favorites from the show over its long run on TV.

Stage setting with team desks a Video Screen with life camera feeds to give the experience of being on a TV Game show. This had been used corporate level as team building for companies and performed in private parties and in Clubs

Games that the audience can play on a show are

Played at themed Weddings, Corporate Offices and Pubs a clubs

The Bo Selecta Characters, Mel B, Michael Jackson along with Craig David and the Bear.

Featuring the Music the music of legends the Bo stars get you on stage too.

A multi tribute to Artists from the 80s and today

Set lists
Gary Barlow and take that songs
Let me go
It only takes a minute girl
How deep is your love?
Pray
Back for Good
The Flood
Beatles Medley
Million Love songs
Greatest day Rule the world
Patience
Shine
Could it be magic?
Everything Changes but you
Relight my fire
Never Forget
Michael Buble
Feeling good
Haven’t met you yet
Home
Cry me a river
Everything
Crazy Love
Lost
Robbie Williams
Angels
Feel