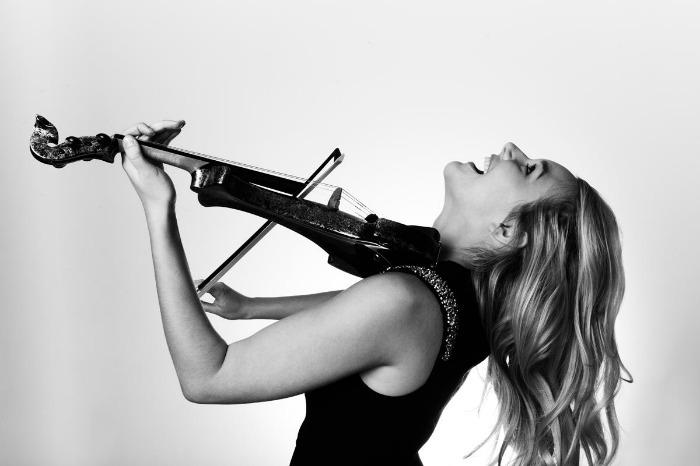 Sally Potterton is a high-impact electric violinist who enjoys playing a mixture music styles from classical to commercial chart, pop, house, RnB, and jazz music. An engaging performer, Sally interacts with the crowd, and combines choreography and improvisation into performances. Based in London/Surrey, she is available for high-end events such as corporate dinners, weddings, parties, club nights, fashion events, launches, and awards ceremonies.

She has been classically-trained on the violin since the age of 3 and studied at Oxford University before gaining a Distinction in her Masters in Violin Performance at Trinity Laban Conservatoire of Music and Dance. Sally now performs in London, throughout the UK, and around the world, and has played at venues such as The O2 Arena, Cardiff Millennium Stadium, The Royal Albert Hall, Wembley Arena, Hammersmith Apollo, The Sporting Club Monte Carlo, and The Roundhouse. She has been lucky enough to travel around the world and perform in countries such as Bermuda, Qatar, Monaco, Bahrain, Thailand and Malaysia, as well as regular tours throughout Europe.

Sample 'chill-out' set list:
Come Away With Me - Norah Jones
Ain't No Sunshine - Bill Withers
Home - Michael Bublé
Fields Of Gold - Sting
Make You Feel My Love - Adele/Dylan
Thinking Out Loud - Ed Sheeran
All Of Me - John Legend
Stay With Me - Sam Smith
Love Me Like You Do - Ellie Goulding
Earned It - The Weekend
Paradise - Coldplay
Rather Be - Clean Bandit