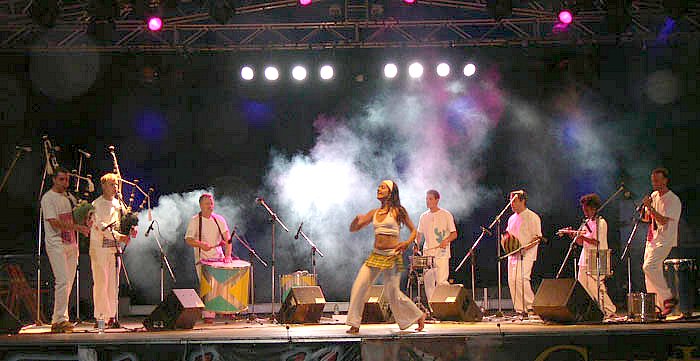 The band is based in Glasgow and Edinburgh, but regularly perform all over the world.

MacUmba is very portable and willing to travel anywhere.

MacUmba is a professional group of musicians based in Scotland who mix the traditional sounds of Scottish bagpipes with the infectious rhythms of Brazilian Samba percussion.

MacUmba have played at many events and festivals all over the world and continue to develop their unique sound, entertaining audiences where ever they go.

The normal instrumentation of the band is three pipers and five percussionists, although they may also be augmented by the addition of Scottish and/or Brazilian dancers.

Big events and festivals MacUmba has played at include...

- The World Cup in France where they supported the maracatu 'nation' Nacao Pernambuco at the Village du Brezil, Saint Denis, Paris.

- The 20th Fiesta de la Rumba in Havana, Cuba, where (although MacUmba are not a rumba group) they were privileged to appear with many famous rumba groups.

- The international Mundo Celta festival in Ortigueira, Galicia, where they appeared with many other bands from Celtic nations.

Radio and television appearances include...

MacUmba has worked closely with the British Council and Scottish Trade International on several occasions, performing in their own distinct costume, which adds a very visual aspect to MacUmba's live performances.